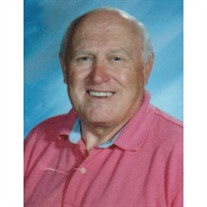 Donald G. McMorris, 78, of Forreston, passed away, Wednesday July 31, 2019 in his home. Donald was born April 12, 1941 in Charleston, Illinois, the son of Eugene and Mary Kay (Ryan) McMorris. He married Phyllis Sue Scott November 28, 1963 in Springfield, Illinois. He graduated from Cumberland High School in 1959, where he was voted "outstanding athlete of the school" lettering in cross country, basketball, and track. He qualified for the state finals in both cross country and track for three years. Don then went on to Eastern Illinois University. He was voted "Captain" and most valuable runner for two years. This was the first time in Eastern's history. He also finished 21st in the National Cross Country Meet. After completing his undergraduate degree, he went on to complete his Masters degree in Education at Eastern. McMorris's first teaching job was at Mt. Morris High where he worked for five years. In that time, he coached five varsity Blackhawk Conference track team championships and five fresh/soph conference track team championships. He then went on for one year as a teacher at Irving Crown High School. Later, he taught three more years at Ashland High School. In addition, he coached Ashland High to a Varsity track team Championship with only eight athletes. He then came to Forreston High School for 27 years as a Guidance Counselor where he left a tremendous legacy. Some of his accomplishments include: Student Council Advisor for 27 years, National Honor Society Advisor for 27 years, Students Against Drunk Driving Advisor for nine years and Track Coach for 15 years. He initiated a number of new projects and programs for students and the community, including: weighted grades, academic letters for scholars, meals on wheels, painting houses for senior citizens, freshman orientation and spirit week. Don's greatest attribute was his relationship with students. They trusted and respected him a great deal. He added a lot of fun and enthusiasm to the school. He was married to his wife, Sue since 1963. They have two children David (Cara), Daniel (Lisa), nine grandchildren Mara, Brady, Allie, Chloe, Carter, Wren, Brice, Hailey, Jasmine and two great-grandchildren Robbie and Zander. Memorial services will be held 2:00 P.M. Saturday August 10, 2019 at First United Methodist Church in Forreston. Please visit and sign his guestbook at www.burketubbs.com

The family of Donald G. McMorris created this Life Tributes page to make it easy to share your memories.

Send flowers to the McMorris family.