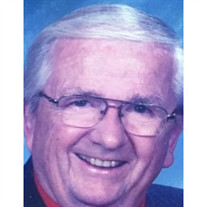 Dr. Kenneth Lincoln Turner, 92, of Overland Park, KS, went to be with the Lord and his beloved wife Fay on March 17, 2017. Ken was born on Feb. 12, 1925, in Cornell, IL to Irwin and Lola Turner. Ken graduated from Cornell High School in 1944 where he gained confidence from his achievements in academics, drama, and sports. He was especially proud of being a great basketball player, which lead to his lifelong love of all sports. An avid fisherman, he then took up jogging in his 60's and golf in his 70's. He would remain loyal to the Forreston Cardinals and was finally rewarded by living long enough to see his Cubs win the World Series. After high school Ken farmed with his uncle and then enlisted in the US Navy in 1945. Fortunately for his descendants, his early confidence lead to a stroll across a dance floor to meet a beautiful, shy girl named Fay Marie Pollett whom he married in 1946. After his discharge from the Navy, he and Fay moved to Ames, IA where he earned his doctorate in veterinary medicine from Iowa State University in 1954. The young couple settled in Forreston, IL in 1955 where Ken established the Forreston Veterinary Clinic. There were many long days in his practice often made longer because "Doc" just couldn't resist staying at the farms to chat and joke with clients who became true friends. Being naturally gregarious and civic-minded, Ken became a founding member of the Forreston Lions Club, was school board president for the Forreston Grade School district and served on the board of the Forreston Mutual Ins. Co. In 1965 he also toured parts of Eastern Europe and Russia with People to People. By 1970, Ken wanted his strong belief in nutrition as the best medicine for animals to become a reality, so he created Vet-Way Feeds as a way to customize animal feed. After he retired from his veterinary business, he became a consultant for Ratite (ostrich) nutrition in parts of the western US and Canada. Over the years Ken and Fay's faith in God became the centerpiece of their lives, and they felt it was a very important gift to share. Ken became a leader in Lay Witness Missions, and Fay led the children's programs. They also organized a Christian outreach retreat weekend for several years at Camp White Eagle. They attended The First United Methodist Church where Ken taught Bible studies. By this time, Ken and Fay were the proud parents of nine children. They were loving, caring parents and loyal fans for all their children's extra curricular activities and life endeavors. They then became superb grandparents traveling the country to support their grandchildren's pursuits. Ken loved the Lord and lived life to the fullest serving Him. He has left a godly legacy for his children, grandchildren, great-grandchildren and generations to come. It's good to know Ken and Fay are, at last, together again in the ultimate garden, Fay tending her flowers and Ken fretting over his tomatoes and onions ready to concoct his famous tomato juice. They are truly missed. Ken is survived by his children Marta (Dick) Holthaus, Alett Turner, Keni (Alan) Gapinski, Leanne (Gale) Brattrud, Elise (Mike) Ross, Robb (Lydia) Turner, Kelly Turner, Edel (Brad) Gunnink, Eden (Brian) Niese; twenty-five grandchildren; eight great-grandchildren; brother Keith (Lavon) Turner; and several nieces and nephews. He was preceded in death by his parents; infant daughter Kara Lee; brother Philip and sister-in-law Lena; and his wife Fay. Visitation will be from 4 to 8 p.m., Friday, March 31, at Burke-Tubbs Funeral Home, 203 S. 3rd Ave., Forreston, IL. The funeral service will be held at 10:30 a.m., Saturday, April 1 at the First United Methodist Church, 402 S. 1st Ave., Forreston. There will also be a visitation from 9:30 a.m. until the time of the service. Burial will take place at White Oak Cemetery. In lieu of flowers, a memorial has been established for White Oak Cemetery in Ken's memory. Friends and relatives are encouraged to share stories about Ken at www.burketubbs.com.

The family of Dr. Kenneth Lincoln Turner created this Life Tributes page to make it easy to share your memories.

Send flowers to the Turner family.