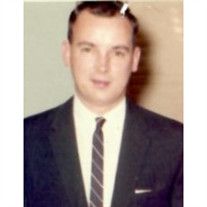 Duane (Dave) D. Barrett, 85, of Freeport, died Saturday March 7, 2020 in his home with his wife and two sons present. Duane was born July 10, 1934 in Stephenson County, IL. The son of James and Hazel (Kline) Barrett. Duane married Patricia A. Lee October 3, 1958 in Rockford, IL. He attended Freeport schools. He proudly served his country in the U.S. Army. Upon returning to Freeport, he entered into employment with Micro Switch/Honeywell in 1953 until his retirement in 1999. He was a member of Freeport Church of Christ. Duane had many interests. He was an avid sports enthusiast, especially football, being an avid Green Bay Packer fan, as well as golf. He also enjoyed Country/Western, soft rock music, and traveling to Tennessee, Carolina, Colorado, New Mexico, and Wyoming. Duane is survived by his wife, Patricia Barrett (Lee) ; two sons, David and Curt Barrett; brother, Rydene Barrett all of Freeport, IL; brother-in-law, Donald (Judy) Lee of Rockford, Il; sister-in-law's, Marilyn Winters of Cody, WY and Beverly Tyrcha of Freeport, IL; also numerous nieces and nephews. Duane was preceded in death by his parents, four brothers, and seven sisters There will be no visitation. A private family service will be held. A memorial has been established in Duane's memory. Please visit www.burketubbs.com to sign Mr. Barrett's online guestbook.

The family of Duane "Dave" D. Barrett created this Life Tributes page to make it easy to share your memories.

Send flowers to the Barrett family.