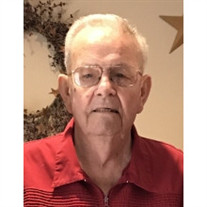 Duane H. Smith died Wednesday, November 21st at Liberty Village Nursing Home. He was born January 29th, 1935 in Lanark, Illinois to Jacob and Ethel (Rogers) Smith. He graduated from Lanark High School in 1952 and married Patricia A. Murphy on June 17th, 1956 at Hanover Methodist Church. They were married for 62 years. Duane was employed at Roger's Ready Mix in Lanark for several years until he began employment at Carroll Service Company as a feed salesman. He worked there for 10 years before he began his employment at ContelTelephone Company (GTE) where he worked for 23 years, retiring on December 31st, 1991. He kept busy in his retirement running a craft business with his wife, Pat, for 10 years and worked once again at Roger's Ready Mix and Barkau Chevrolet in Cedarville. He was a member of the Lanark Fire Department from 1958 to 1986. He was the chief for 10 of those years and then served as a trustee until 1995. He coached his son's Little League baseball team for 7 years. He also enjoyed watching his grandchildren play sports and participate in school activities. He liked going for coffee at local restaurants and he loved to play cards. He was a member of the Lanark Methodist Church and later transferred to First Methodist Church in Freeport, Illinois. Duane and Pat had four children, Kathleen A. Zimmerman, Freeport, Rox Anne (Jim) Weik, Freeport, Susan M. (Rick) Lott, German Valley,and Michael D. (Kathleen) Smith, Freeport. They have 7 grandchildren, Tyler Weik, Ryley (Sarah) Lott, Allyson (Josh) Wilken, Matthew (Cassie) Weik, Aaron (Jordan) Smith, Adam Smith, Abigail Smith and 5 step grandchildren, Chip (Jenny) Zimmerman, Mark (Diane) Zimmerman, Julie (Scott) Blair, Cory (Bonnie) Zimmerman, and Jennifer (Pete) Norman. They have 4 great grandchildren and 14 step great grandchildren. Duane is also survived by his sister in law, Alvera (Fay) Smith, of Lanark along with many nieces and nephews. He was preceded in death by his loving wife, Patricia of 62 years, three brothers, Francis, Franklin, and Fay (Bud) along with six sisters, Ellen (Manning), Betty (Kniss), Alice (Landherr), Donna (Bausman), Ruth (Cook), and Barbara (Butts). Visitation will be Tuesday, November 27th from 3:00 to 7:00 p.m. at Burke -Tubbs Funeral Home, Freeport. Funeral services will be held Wednesday, November 28th at 11:00 a.m., First United Methodist Church, Freeport with a luncheon to follow at the church immediately following the service. There will be a private family burial held at a later date at the Lanark Cemetery. In lieu of flowers, a memorial has been established in Mr. Smith's memory. Please sign Duane's guestbook and share a remembrance at www.burketubbs.com

The family of Duane H. Smith created this Life Tributes page to make it easy to share your memories.