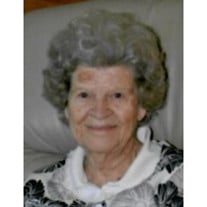 Edith Chambers, 94, died April 28, 2020, at Liberty Village in Freeport, IL. She was born September 8, 1925, in Greenback, TN, to William Robert Amburn and Minnie Hazel (Clark) Amburn. She met her future husband, William James (Jim) Chambers, when they were both employed by the Manhattan Project at Oak Ridge, TN. They were married June 25, 1948, and moved to Waterloo, IA. After raising 4 children, they retired to Maryville, TN in 1979 and lived there for 31 years. Survived by: sister Virginia Reagan of Gatlinburg, TN; brother Ronald Brewster of Strawberry Plains, TN; 3 sons, Michael (Becky) of Jacksonville, FL, Gerald of Spring Hill, FL, Stephen of Summerland Key, FL; daughter Mary (Michael) Crapp of Freeport, IL; 4 grandchildren (April, Laura, Nikki and Sherri) and 6 great grandchildren (Aubrey, Cassidy, Christopher James, Drew, Kate and Quinlan). Preceded in death by: husband William Chambers; sisters Norma Jones, Carolyn Jacobs; brothers Virgil Amburn, Marvin Brewster; daughter-in-law Deborah (Gerald) Chambers. She will be buried with her husband in Jacksonville National Cemetery in FL. Although she was raised under difficult conditions in the midst of the Great Depression, Edith perservered and grew to be a strong and loving wife and mother. She nurtured her children and cherished her grandhcildren and great grandchildren. When her family needed her, Edith was always available to lend a helping hand, deliver a delicious meal or share a heavy burden. Cremation rites have been accorded. A memorial will be established in her memory.

The family of Edith M. Chambers created this Life Tributes page to make it easy to share your memories.

Send flowers to the Chambers family.