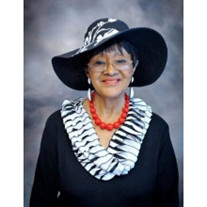 Erma Lee Davis was born on February 24, 1930 at 622 E. Winneshiek Street in Freeport, IL, to McKinley "Daddy Boom" and Josephine "Big" Davis. She was the 3rd Eldest of "Seven" Wonderful Children. It wasn't long before it was evident that GOD had His Hands on her Life, which she accepted and "Let Her Light Shine" as a Girl. Erma (with an "E") attended the Freeport School District, beginning at John W. Henney School (3rd Ward where the King Campus Boys & Girls Club now stands), and continuing through High School. As a Freeport Pretzel, Erma displayed her God-given Talents in Art, Drama, Poetry, and Music, which continued to Blossom into her Adulthood. With her Rich Tenor Voice, she decided to secretly enter a Talent Contest at a Local Club, where she competed with a Handsome Contestant Crooner who was identified as a Part of the Legendary "Cole" Brothers, Mason Brick Layers and Construction Experts from Southern Illinois (Carrier Mills). This Man, James Alfred Cole, did Win 1st Place (singing Nat King Cole's "Sweet Lorraine"), while Erma Davis Won 2nd Place (singing her arrangement of "He's Tall, He's Brown, He's Fine, and He's Mine"). That Night, the Divine Connection and Union was made; and after a "Scolding and Whoppin", a COLE-lossal Family History was established! As GOD orchestrated, Erma also bore "Seven" Talented Children: Linda, James "Butch", Clyde, Steven, Michael, Brenda, and Carl. Using her Poetic and Songwriting Gifts and Skills, she navigated her Motherly task to raise a "House Full of Kids" by creating a Vocal Ensemble, later known in the Region as "The Singing Coles". She taught them Original Compositions and Arrangements of Tunes to Celebrate every Holiday and Occasion, even writing Programs (sometimes "on the Spot") that featured her Wonderful Crew! Incidentally, her Extraordinary labor of Love and Community Service warranted State-level recognition and honorable mentions in the "Illinois History" Magazine (1963 & 65 Editions). After the passing of their Father, the "Cole" Siblings grew to become Professionals in various Fields, while continuing in their Musical Gifts and Ministries (occasionally reuniting to share Performances)! Through the Years, Erma was quite renowned for her work with the PTA, the Public Library Story Hours, Etiquette Classes, and her Historic presence as the Beautiful Receptionist at the Freeport Journal Standard, dressed "Sharp" Each Day, even walking Downtown in "Slick" High Heel Shoes! Her Life took a New Turn when she chose to take care of her own Mother and eventually two of her Sisters until their passing, Erma continued to be her "Phenomenal Self" by Inspiring and Empowering not only her Children, but her Grands and Great Grands, thus expanding her Motherly "AKAs" of "Momma" and "Mom" Cole to "Gram", "Granny", "Miss Erma" and "Mother Cole" at Church, with Decades of increasing manifestations of her Wit, Humor, Brilliance, Resilience, and Ageless Beauty! On Sunday, February 9, 2020, after the LORD carried her beyond her "Four Score" Years (Psalm 90:10), plus another "9", she transitioned from "Life to Eternity" (only fifteen Days before her "90th" Birthday), leaving quite a "COLE-lossal" LEGACY! Erma was preceded in Death by her Parents: McKinley and Josephine (Turner) Davis; her Husband, James A. Cole; "5" Siblings, Sisters: Margaret Broom, Gwendolyn "Sister Joseph Mary" Davis, and Melva Lyn Davis; and Brothers: Hosea Davis, and McKinley "Deacon" Davis, and her Eldest Son, James LeRoy Cole "Sheft-hat Khnemu Ra". She leaves to Cherish her Memory: her Brother and last living Sibling, Joseph Davis, and Sister-in-law, Lilly ("Deacon") Davis; her Children: Linda Cole, Clyde (Patti) Cole, Steven (Candace) Cole, Michael (Geraldine) Cole, Dr. Brenda (Bill) Bowers, and Carl (Dianna) Cole; and a Host of Grand-Children, Great Grand-Children, Cousins, Relatives, and Friends! A Celebration of Her Life will be on Saturday, February 15, 2020, at Burke-Tubbs Funeral Home (504 N. Walnut Ave., Freeport), with Visitation @ Noon, and Service @ 2PM. Burial will be in Chapel Hill Memorial Gardens.

Erma Lee Davis was born on February 24, 1930 at 622 E. Winneshiek Street in Freeport, IL, to McKinley "Daddy Boom" and Josephine "Big" Davis. She was the 3rd Eldest of "Seven" Wonderful Children. It wasn't long before it was evident that GOD... View Obituary & Service Information

The family of Erma Lee Davis Cole created this Life Tributes page to make it easy to share your memories.