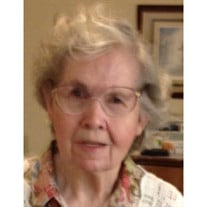 Esther was born to William and Zelda Saxby on December 11, 1929 at Humboldt, Iowa. Esther was the oldest of six siblings; Donald (Sandy), Freeport, Bill Jr., Albert, WI., Wilma (Wally) Kilker, Forreston, Eugene Paul (Libby) San Diego, CA, and John (Delaine) MN. Esther married Charles Sydney Kuntzelman on March 30, 1962. Children are Jeannine Arlene Williams of Mesa, AZ, Teresa A. David of Freeport, and Errol Blaine Kuntzelman of Farrwest, UT. Two children, Michael Dennis and April Rea, precede Esther in death. Also, preceding her were her parents, William and Zelda, her sister, Wilma Arlene and her two son-in-laws, Teddy Lind Williams and Mark Allen David. Esther was blessed with 8 grandchildren, Jeannine and Ted (Teddy, Apirle, and Lacey) Teresa and Mark (Heather and Melissa) and Errol and Tracy (Ammory, Kamen and Teig) 9 great grandchildren and 6 great, great grandchildren. Esther and Charles were active members of The Church of Jesus Christ of Latter-Day Saints for over fifty years. Esther served the church in many capacities and always was happy to serve others. Esther and Charles/Chuck gave of their talents and time to their church and did serve a mission in their sixties in California. They also, gave service to the Freeport Manor Nursing Home, now, Pearl Pavilion by calling Bingo each week for several years. Esther had great artistic talent with drawing and the creative arts. She enjoyed playing the piano, sewing, gardening, canning, and singing. Esther had a real passion for studying Genealogy and worked many years on researching and documenting the family history. She made it a point to attend all family reunions and quiz family members about family lineage and also, tried to document family story anecdotes. Esther was a beautiful, intelligent, capable woman who had to overcome many difficult obstacles in her lifetime, which she did with patience and grace. She was blessed with a truly loving husband who supported her in all ways. They had a long, loving marriage of 56 years.. During her long illness, Charles sang to Esther, read to her, told her corny jokes, and prayed with her on a daily basis. She will be missed greatly. Funeral services will be Saturday January 19, 2019 held at the LDS chapel at 1716 S. Forest Rd., Freeport. Visitation will be from 11:00 a.m.-12:45 p.m. and the Funeral service will be conducted at 1:00 p.m. There will be a brief graveside ceremony and then, a Reception/Luncheon afterwards. A memorial fund has been established in Esther's name for the Shriner's Children's Hospital.

The family of Esther L. Kuntzelman created this Life Tributes page to make it easy to share your memories.

Send flowers to the Kuntzelman family.