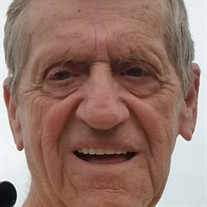 Frederick (Fred) D. Eberle, 81 of Freeport, IL. He passed away at home on August 24th surrounded by loving family after losing his battle with cancer. Fred was born on April 12th 1940 in Freeport, son of Edith (Bogenrief) and Robert Eberle. Fred was a Pretzel, graduating in 1958. Fred, married Connie (Rogers) on February 11th 1962 in Kent Il. Their 59 years of marriage produced two sons David, (Jamie DaMask) of Freeport, and Douglas (Jodi Riech) of Cedarville. Fred’s grandchildren are Amanda (Evan) Fye of Madison, Kyle (Whitney) Eberle of Freeport, and Justin Martin(Amber Lasco) of Freeport. Fred was also blessed with 5 great grandchildren who were the light of his life, Paxton, Kellan, Felix, Wyatt, and Natalie. His real passion was auto racing. At an early age he and his friends attended the races at Freeport and surrounding tracks. As he grew up, that love of racing expanded to becoming an official, a flagman, and promoter and he was held in high regard. That love of the sport extended to help and watch his sons both become racers, as well as his grandson. He rarely missed watching them compete. This was truly his lifelong passion. Fred also loved high school sports, and watching his grandchildren compete. Later his love of high school football took him to many area games, and he enjoyed playoff football. Fred worked 28 years for Wonder Bread in Rockford where he was the branch manager. After retiring, he then went to work for IWI Auto parts in Freeport where he worked for an additional 16 ½ years. He finally retired for good in 2018 at the age of 78. Fred loved his home, and his family. He was a great role model, hard working, loyal, and had an amazing whit about him that everyone loved! He enjoyed his racing trips, as well as his yearly treks to Florida to get away from the cold weather. Fred is survived by his family, two sisters, Marilyn (Glenn) Underwood, and Reggie Lamm both of Freeport, and many nieces and nephews. Fred was preceded in death by his parents, and brother Tom Eberle. And his beloved cat Maxwell. Funeral services will be 11:00 A.M. Monday August 30, 2021 at Burke-Tubbs Funeral Home in Freeport, IL. Visitation will be Sunday August 29, 2021 from 1-4:00 P.M. also at Burke-Tubbs Funeral Home in Freeport. In lieu of flowers a memorial has been established for St. Judes Childrens Hospital and C.O.P.S. Foundation.

Frederick (Fred) D. Eberle, 81 of Freeport, IL. He passed away at home on August 24th surrounded by loving family after losing his battle with cancer. Fred was born on April 12th 1940 in Freeport, son of Edith (Bogenrief) and Robert Eberle. Fred... View Obituary & Service Information

The family of Frederick "Fred" D. Eberle created this Life Tributes page to make it easy to share your memories.

Send flowers to the Eberle family.