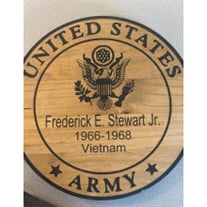 Frederick E. Stewart Jr., 74, of Lena, IL passed away Saturday April 17, 2021 in his home. He was born February 15, 1947 in Champaign, Illinois, the son of Frederick and Dorothy (Baal) Stewart. He married Barbara Kraft on January 11, 1969. They spent the next 52 years together in a loving marriage. Mr. Stewart served for his country in the US Army from 1966-1968 during the Vietnam War. He was a hardworking man, he worked at Kelly Springfield for 30 years, and milked cow on the weekends, working closely with Fischers and Civil he drove truck for 10 years. When he was not working, Fred enjoyed spending time in the outdoors, fishing, hunting, and watching deer (sometimes the deer would watch Fred). For relaxation he would cut wood and drive his tractor. Surviving is his wife, Barbara Stewart; two daughters, Amy Sue (Jo Sieffert) Shelton, and Billie Jo (Roger) Buss both of Freeport; sister, Linda (Dave) Van Matre of Freeport, brother Kenny (Dawn) Stewart of Florida; four grandchildren, Anthony Brant, Jessica (Cody) Bockland, Cara (Tyler) Goninen, and Clayton Buss. Also surviving are seven great-grandchildren and a host of nieces, nephews, great nieces, great-nephews, and in-laws. Frederick was preceded in death by parents, son-in-law, Russ Shelton; two brothers, Rick, and Bob Stewart; two sisters, Donna and Barb; and brother-in-law, Larry Boos. Cremation rites have been accorded. Services date and times are pending. Burial will take place in Chapel Hill Memorial Gardens. A memorial has been established in Mr. Stewart's memory. Please sign his guestbook and share a remembrance at www.burketubbs.com

The family of Frederick E. Stewart Jr. created this Life Tributes page to make it easy to share your memories.