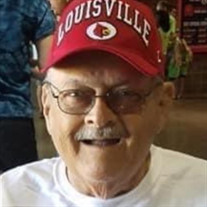 Gary W. Erdmier, 73, formerly of Freeport, passed away, Monday January 24, 2022, at University of Louisville Hospital in Louisville Kentucky. He resided in Taylorsville Kentucky. Gary was born August 4, 1948, in Freeport, the son of William L. and Athelia (Wise) Erdmier.He graduated from Freeport High School is 1967 and then proudly served for his country in the U.S. Air Force (1967-1971) during the Vietnam War. Gary married Gladys Jean Dunker December 30, 1972, in District Heights, Maryland. He was a former member of Faith United Methodist Church. He was also a member of the Moose Lodge in Freeport. Gary loved his family and was a great friend to all who knew him. He loved everything of nature and loved to fish. Teaching grandkids to fish he took great pride. He coached softball for his three daughters, and became the proudest soccer cheering grandpa one could imagine of his grandsons. He is what they call their "good luck poppie" when it came to soccer. He enjoyed the quiet moments but thrived with the rambunctious moments he cherished with his grandkids and great-grandkids. Gary did everything on his own terms from his childhood until the end. The family would like to thank the nurses and staff of University Kidney Center Hikes Lane in Louisville, Kentucky for taking such good care of his dialyis needs for the last 8 years. They too became his family away from family. Surviving is his wife, Gladys Erdmier of Taylorsville, Kentucky; three daughters, Tammy (Jeffrey) Sample of Louisville, Kentucky, Linda (Kareem) Al-Majedi of Louisville, Kentucky, and Renee (Zuhair) Al-Sari of Taylorsville, Kentucky; brother, Ronald (Jackie) Erdmier of Plymouth, Wisconsin, 10 grandchildren Timothy (Linda) Abbott of Freeport, Daniel (Emma Escobedo) Abbott of Freeport, Luke (Anna McGee) Abbott of Louisville, Kentucky, Athelia (Ibrahim) Al-Sari of Louisville, Kentucky, Naomi (Zachary) Brown of Shannon, Jasmia Al-Sari (deceased), Adnan Al-Sari, Akiel Al-Sari, Amaar Al-Sari, Ameer Al-Sari all of Taylorsville, Kentucky. Five great-grandchildren of Freeport and Shannon. Also surviving are many nieces and nephews. Gary was preceded in death by his parents and granddaughter, Jasmia Marie Al-Sari. Funeral services will be 1:00 p.m. Monday January 31, 2022. Rev Melissa Meyers will officiate. Visitation 11:00 a.m. until the time of service at Burke Tubbs. Burial will be in Chapel Hill Memorial Gardens. A memorial has been established Gary's memory. Please sign his guestbook and share a story at www.burketubbs.com

The family of Gary W. Erdmier created this Life Tributes page to make it easy to share your memories.

Send flowers to the Erdmier family.