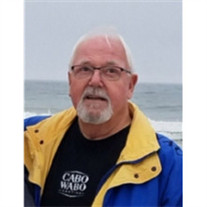 George William Ritter, 76, of Freeport, IL passed peacefully with his family at his side on Monday, April 20, 2020. George was born November 12, 1943 to Lester Ritter and Norma Coulter (Robert Coulter) in Waverly, IA. He graduated from Maquoketa Valley High School in Delhi, IA before enlisting in the United States Air Force. He was trained a Linguist at Yale University before serving as a Mandarin Linguist in Vietnam. During his time at Yale, he had the honor of serving on the Color Guard for President John F. Kennedy. George's pride in his service and love of country was deep and lifelong. After serving his country, George met the love of his life, Bonnie Catherine Kloft. George always enjoyed telling the story of how he knew the moment he first met Bonnie that he wanted to make her his wife. They were married on January 23, 1965 in Bellevue, IA. George was not Catholic at the time of their meeting but studied the faith under the guidance of Father Capezee, an Air Force Chaplain. He surprised Bonnie on his birthday with the gift of conversion so that they could share and grow in their faith together. Together, George and Bonnie raised three children, Kim, Jeffrey, and Christina. They were married fifty-five years and shared many adventures together, such as two pilgrimages to Rome and other holy sites in Italy. George was employed by John Deere and the Dubuque Packing Company. He later worked for Honeywell as a systems analyst and software design engineer for thirty years before retiring in 2005. He was then employed by Bocker Auto Group until retirement. In addition to his studies at Yale, he also was educated at Loras College where he studied business and graduated in 1975. George's greatest loves were his family, his faith, and his community. He was a member of the Knights of Columbus and the Elks Lodge, serving as Exalted Leader of the Freeport lodge, and was also a member of the Eagles Lodge. He was an active member of St. Thomas Aquinas parish where he was a lector. His generosity of spirit and unshakable faith will be an inspiration to his family and loved ones always. George was a voracious reader and student of history all his life. For many years, he was a Civil War re-enactor and his encyclopedic knowledge of the Civil War was an interest he shared with his children and grandchildren. A man with a big heart and a bigger laugh, George had a zeal for life, fun, and a little mischief. He was always quick to laugh, quick to share a story, and quick to share a hug when one was needed. He leaves behind a legacy of abundant love and exuberant joy. He will be much missed by those who knew and loved him, always. George is survived by his beloved wife Bonnie and their three children Kim (Floyd) Sutton of Freeport, IL, Jeffrey (Stephanie) Ritter of Machesney Park, IL, and Christina (Ryan) Herbig of Freeport, IL. He is survived by his grandchildren Nicholas (Brianna Zahn) Ritter, Allison Sutton, Emily (Joshua Lambrecht) Sutton, Sean Ritter, Jeffrey Scott Ritter, Michael Herbig, Andrea Herbig, Alex (Kaylee) Ghinazzi, and Kaelynn Ghinazzi. He is also survived by three great-grandchild Emery, Lyla, and Addison Rose Ritter. Other surviving family members include his brother Thomas (Marcella) Ritter of Belle Plaine, IA, Gary (Karla) Kloft, Linda (Michael) Bock, James (Mary Jo) Kloft, and Dennis (Joyce) Kloft, as well as many niece, nephews, and dear friends. Special mention must also go to his cherished cat and companion, Sophie. George was preceded in death by his parents, stepfather, sister Carolyn Moriarty, and brother Lynn Ritter. A private funeral Mass will be celebrated at St. Thomas Aquinas Catholic Church on Thursday, April 23, 2020. Fr. Kenneth Anderson will officiate. Please sign George's guestbook and share a remembrance at www.burketubbs.com

George William Ritter, 76, of Freeport, IL passed peacefully with his family at his side on Monday, April 20, 2020. George was born November 12, 1943 to Lester Ritter and Norma Coulter (Robert Coulter) in Waverly, IA. He graduated from Maquoketa... View Obituary & Service Information

The family of George W. Ritter created this Life Tributes page to make it easy to share your memories.

Send flowers to the Ritter family.