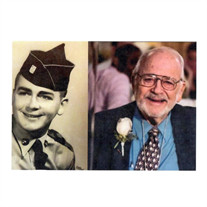 Gerald Ardell Harbach, age 92, died on November 2, 2021 at home. Gerald was born April 12, 1929 in Freeport, IL to Karl and Velma (Stotz) Harbach. He attended Flansburg Country School and then Freeport schools. He was a football player and Golden Glove boxer. Gerald graduated in 1947 from Freeport High School. In 1947 he joined the National Guard and was part of the 3rd Division, 15th Infantry Regiment, George Company. He was promoted to Sergeant First Class during his service. Gerald married Isabell J. Campbell October 9, 1948 at Second Congregational Church in Rockford. They moved to the family farm in Freeport in 1950 and were blessed with a daughter Sally. Gerald was then called up to active duty in January 1952 for the Korean War. He served on the front line from October 1952 to August 1953, specifically Outpost Tom and Harry. Although he had multiple close calls, including being shot and multiple shrapnel wounds, God watched over him and he lived through the war. In one situation, Gerald was one of 15 men out of 125 in his company that survived a particularly gruesome battle. Gerald was nominated for two bronze stars and a silver star during his service. He accepted one Bronze Star for his service in Korea. Gerald returned to Freeport. He and wife Isabell went into the business of farming and growing Harbach’s Meats with Gerald’s parents, Karl and Velma. Gerald worked on the farm, raised livestock and promoted their business on his route into Freeport with Karl. He expanded the farm and business through his whole lifetime. Gerald was active with the Korean War Vets organizations both locally and nationally. He marched in many parades in Illinois, participated in Vets Roll and laid a wreath at the Tomb of the Unknown Soldier in Washington, D.C. He was a member of the Stephenson County Board for 28 years. He also played Santa Claus for 47 years for friends, family and Harbach’s Meats customers. Gerald was a member of the Freeport Church of Christ since 1965. He loved God, his family, his country, and his community and tried to show this through his service. Surviving are his children Sally (Bob) Fleming of Naperville, IL, Bruce (Karen) Harbach of Freeport, IL, Bradley (Susan) of Shannon, IL and Mitchell (Won) of Florida and one sister Delores Moll of Shannon, IL. Also surviving are 15 grandchildren and 19 great grandchildren. He is preceded in death by his wife of 71 years Isabell, one newborn son Eric, and his parents. Visitation will be held 4:00 p.m. - 7:00 p.m. at Burke-Tubbs Funeral Home on Friday, November 12, 2021. The funeral will be 1:00 pm at Freeport Church of Christ on Saturday, November 13, 2021. In lieu of flowers we encourage donations to the Freeport ROTC and KWOA Chapter 150 (Korean War Veterans). Burial will be in Eleroy Cemetery. Please sign Mr. Harbach's guestbook and share a memory at www.burketubbs.com

Gerald Ardell Harbach, age 92, died on November 2, 2021 at home. Gerald was born April 12, 1929 in Freeport, IL to Karl and Velma (Stotz) Harbach. He attended Flansburg Country School and then Freeport schools. He was a football player and... View Obituary & Service Information

The family of Gerald Ardell Harbach created this Life Tributes page to make it easy to share your memories.

Send flowers to the Harbach family.