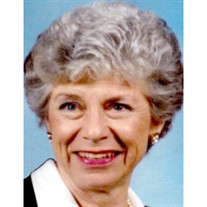 Inez Esther Spooner 1928 -2018 ROCKFORD, IL - Inez Esther Spooner, 90, passed away on Saturday, August 11, 2018 at Bickford House in Rockford. She was born Inez Bauer in Reese, Michigan on May 6, 1928, the second of two daughters born to Esther and Herman Bauer. Her older sister, Leona Van Antwerp of Portage, MI, survives. Inez graduated with honors from Vassar High School and Western Michigan University in 1946 and 1950, respectively. On August 26, 1950, she married Paul Charles Spooner in Kalamazoo, Michigan. They were happily married for 57 years, until Paul's passing in November, 2007. Inez and Paul lived in Kalamazoo and Lansing, Michigan until 1965, when the Spooner Family moved to Freeport, Illinois. Five children survive Inez's passing: Scott (Barbara) Spooner of Springfield, IL; Sherry (Fritz) Danielson of Champaign, IL; Craig (Debbie) Spooner of Jamestown, NC; Todd (Faith) Spooner of Genesee, CO; and Stacey (Michael) Kohls of Loves Park, IL.; niece and goddaughter of Inez: Melinda Van Antwerp of Kalamazoo MI; Inez is also survived by nine grandchildren and one great-grandchild: viz., Rachel, Kathryn, Christopher, Matthew, Stephanie, Emily, Jackson, Samantha, Spencer, and Payton. Inez taught high school business education courses in Delton and Portage, Michigan, and served as a substitute teacher in the Freeport public schools. She also worked as an executive secretary at Home Mutual Insurance Company and the Lansing YMCA; and as a tax paralegal for Law Offices of Plager, Hastings & Krug in Freeport. Inez was a 53-year congregant of Our Redeemer Lutheran Church in Freeport, where she served as an officer, Sunday school teacher, Quilters Club member, and volunteer typist for the Lutheran Library for the Blind. Inez had a passion for adventure, travel and art. During an active 90 years she traveled throughout North America, Europe, Central America and Africa; cross-country skied, golfed, gardened, quilted, knitted and sewed. She was an inspiration to her loving family, due in part to her eternal optimism, her deep and abiding faith in Jesus Christ, and her willingness to do and try anything - at least once. She will be sorely missed by all of us. Visitation will be 11:00 am with a funeral service being held at 1:00 pm on Friday, September 7, 2018 at Our Redeemer Lutheran Church. Interment will be held at Chapel Hill Memorial Gardens. A luncheon will be held following the services at Our Redeemer. In lieu of flowers, memorial contributions may be made to Our Redeemer Lutheran Church and Mercy Home Hospice Care. Please share a memory of Inez at www.burketubbs.com.

The family of Inez E. Spooner created this Life Tributes page to make it easy to share your memories.

Send flowers to the Spooner family.