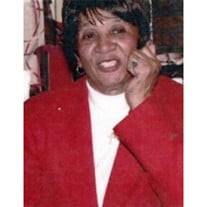 Irene Lewis 89, of Freeport, Illinois went to her eternal home on Friday, September 4, 2020 at home surrounded by her family. She was born December 22, 1930 in Pocahontas, Mississippi to Thomas Hamilton and Eva (Laird) Hamilton the oldest of seven children. She obtained her formal education from CMI school in Mississippi. Irene married Willie Lewis on June 22, 1948 in Jackson Mississippi, and to this union 10 children were born. She moved to Freeport, Illinois in June of 1953 and made this her permanent home. After she arrived in Freeport Christine Salter and Ernestine Norman two women of God took her in and made her apart of their family they were very instrumental in her walk with the Lord. Irene became a member of First Church of God under the leadership of Rev. Everett Jackson; she remained a faithful servant of First Church of God serving in many capacities until her health no longer permitted her to. Irene worked for Structo and then went on to work for Micro Switch a division of Honeywell until her retirement. After her retirement she wanted to keep busy so she worked for the Freeport School District 145. Irene was into fashion, she had great taste in style and class she loved dressing up and always looked the part. She was very articulate about her home, she liked everything kept clean and in place. She could be found making changes to her already beautiful home from time to time because she enjoyed decorating and making every room beautiful. She enjoyed spending time with her family, gardening and cooking she well know for her chocolate cakes and her infamous peanut brittle. She leaves to cherish her memories six sons; Willie (Susan) Lewis Jr. of Racine, Wis., Johnnie Lewis of Freeport, IL., Kenneth Lewis of Seattle, Wa., Larry Lewis of Houston, TX., Scott (Lasonia) Lewis of Loves Park, IL., Carl (Rosina) of Mesa, AZ., four daughters; Patricia Allbritton of Tylertown, Ms., Gloria Lewis, Linda Harrell both of Freeport, IL., Sharon (Dewitt) Thomas of Colombia, SC., one brother Thomas (Fannie) Hamilton of Clinton, MS., two sisters; Delores (Ray)Phillips of Flint, MI., Ella Martin of Jackson MS., sister in-law Gloria Hamilton of Moreno Valley, CA., twenty one grandchildren, forty three great grandchildren, six great - great grandchildren, a host of nieces, nephews other relatives and friends, special friend Mahalia Guess, Annie Ruth Stewart. She was preceded in death by her parents Thomas and Eva Hamilton, stepmother Edna Hamilton, husband Willie Lewis Sr., two sisters Albertine Hamilton, Julia Cottrell, aunt Tabitha Reed stepdaughter Willa Long, brother Robert Hamilton, brother in-law Johnnie Walker, sister in-law Essie Walker, friends Shirley Farrar, Christine Salter, Ernestine Norman. Funeral services will be held 1:00 p.m. Saturday September 12, 2020 at Faith for Miracle Deliverance and Worship Center. Visitation 11:00 a.m. until the time of service at the church on Saturday. Burial will be in Oakland Cemetery. Please sign Irene's guestbook and share a memory at www.burketubbs.com

Irene Lewis 89, of Freeport, Illinois went to her eternal home on Friday, September 4, 2020 at home surrounded by her family. She was born December 22, 1930 in Pocahontas, Mississippi to Thomas Hamilton and Eva (Laird) Hamilton the oldest of... View Obituary & Service Information

The family of Irene Lewis created this Life Tributes page to make it easy to share your memories.

Irene Lewis 89, of Freeport, Illinois went to her eternal home...

Send flowers to the Lewis family.