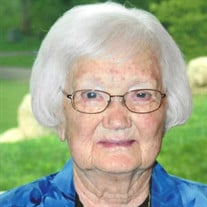 Jean Joyce, age 96, passed away peacefully at Winn Prairie in Freeport, IL on April 14, 2022. Jean was born in Kalona, IA on May 7, 1925 to Genevieve (Buck) and John Fry. Jean received a Liberal Arts Degree from Marquette University where she met her future husband Eugene after WW 2. They were married in 1948 and over their 51 year marriage raised 5 children. They lived in Milwaukee WI, Independence IA, Freeport IL, Cedarville IL, and Lena IL. In the late 1960s, Jean went back to college and received her teaching degree. She taught Special Education then Primary Education in District 145 for 17 years at Southside, Center, and Jane Addams Schools. Jean was passionate about her students and teaching. Along with her classroom work, she was a Union Rep and fought for fair treatment for her fellow teachers. Though she’d been retired for over 35 years, Jean still had former 1st, 2nd and 3rd grade students stay in touch and visit. Jean was a member of PEO, Delta Kappa Gamma, Beta Sigma Phi, Lena Women’s Club, Historical Societies of Cedarville, Lena and Stephenson County, St Joseph Women’s Club, Stephenson Co Retired Teachers Association and served on the Illinois Human Rights Authority. Jean was an accomplished musician, playing the flute and piano, and had a lovely singing voice. Along with music her many interests included playing Bridge, college basketball (Go Marquette!) and any activity in which her children, grandchildren and great grandchildren were involved. Her father was a compassionate, intuitive country doctor and her mother a fair-minded, intelligent nurse. Those traits certainly influenced Jean and shaped her beliefs in kindness, fairness and above all else helping those in need. If you wish to make a memorial donation, please consider a social justice organization that has meaning for you. Jean was preceded in death by her parents, husband Gene, son Tom, and brothers Jack, Bill, and Ed. She is survived by her children Tim (Libby) of Charlotte NC, Bill (Mary) of St Joseph MN, Dan (Karen) of Newark IL, Mary Jean Adkins (Rich) of Dundee, IL; 9 grandchildren and 16 great-grandchildren; brother Paul Fry of Freeport and sister Carolyn Levy of Washington IA; and many nieces and nephews. Jean’s family would like to thank the staff of Liberty Village where she lived for 10 years, the staff of Winn Prairie who lovingly cared for her in her remaining years, and FHN Hospice who helped bring comfort and grace to Jean’s final days. Funeral mass will be held 10:30 a.m. Monday May 23, 202 at St. Thomas Aquinas Catholic Church. Fr. Peter Snieg will officiate. Visitation Sunday May 22, 2022 2:00 p.m.- 4:00 p.m. at Burke Tubbs Funeral Home. Burial will be in Cedarville Cemetery.

Jean Joyce, age 96, passed away peacefully at Winn Prairie in Freeport, IL on April 14, 2022. Jean was born in Kalona, IA on May 7, 1925 to Genevieve (Buck) and John Fry. Jean received a Liberal Arts Degree from Marquette University where she... View Obituary & Service Information

The family of Jean Marie Joyce created this Life Tributes page to make it easy to share your memories.

Jean Joyce, age 96, passed away peacefully at Winn Prairie in...

Send flowers to the Joyce family.