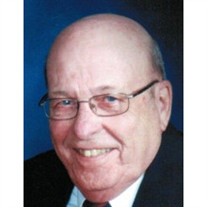 John R. (Jack) Bushelle 1932 - 2018 John R. (Jack) Bushelle, age 86, died November 24, 2018. Born June 9, 1932 in Freeport, the son of Ralph and Eleanor (Bloom) Bushelle. He graduated from Aquin High School in 1950. Married Marjorie Kuehl in Freeport on June 27, 1953 at St. Joseph Church. He was employed by Intercity Box Co. from 1950 to 1995, serving as President for 20 years. After the sale of Intercity Box, he was employed by Rock Valley Packaging in Loves Park for 2 years, retiring in July of 1997, Jack was a member of St. Thomas Aquinas Church serving as usher, greeter, and collections counter. He was a member of the former Germania Club, Elks, KC Council 653, Aquin Boosters, and Board of Directors of Union Savings Bank since 1981. In 1976 he spearheaded the building of a house at Willow Lake as a fund raiser for Aquin Boosters. He coached Little League baseball, and enjoyed following his sons' and grandchildren's sports. After retirement he was active in the Meals on Wheels program and helping with fund raising activities of Presence St. Joseph Auxiliary and Presence St. Joseph Home, in addition to Aquin High School. He enjoyed golfing and woodworking, and was an avid Notre Dame and Green Bay Packers fan. He was a loving husband, father, grandfather, and friend who was always willing to lend a helping hand. He is survived by his wife Marjorie of 65 years, and 2 sons, David (Diane) Appleton, WI and Donald (Mary Kaye) Port Angeles, WA. Three grandchildren, Kelly, Tyler and Branden. Brother James (Esther) Bushelle Beloit, WI and many nieces and nephews. He was predeceased by his parents, brother Robert and 2 sisters, Leona Rohde and Lucille Mowery. Visitation will be at Burke Tubbs Funeral Home on Thursday December 6, 2018 from 3:00 to 6:00pm with Rosary preceding visitation at 2:30pm. Funeral Mass will be at St. Thomas Church on Friday December 7, 2018 at 10:30am with Fr. Ken Anderson officiating. There will also be a visitation from 9:30 am Friday until the time of service at St.Thomas. Burial will be in Calvary Cemetery. Memorials have been established for Presence St. Joseph Auxiliary, Aquin High School, and St. Thomas Church in Mr. Bushelle's memory. Please sign his guestbook and share a remembrance at www.burketubbs.com

The family of John R. "Jack" Bushelle created this Life Tributes page to make it easy to share your memories.

Send flowers to the Bushelle family.