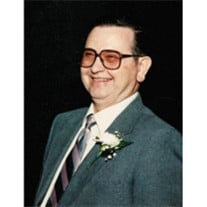 John H. Gibbs, 88, of Freeport died Saturday May 19, 2018 at Lena Living Center. He was born December 11, 1929 in Manchester, IA to John H. Gibbs Sr. and Gertrude Scovill. At an early age he moved to Rockford and worked for Roper Co. from 1947 to 1958. He then went to work for the Kroger Co. in Rockford and later when the store moved to Freeport. He worked for Kroger from 1958 until 1974 when the Freeport store closed. In 1974 he began working for the Freeport School District as a custodian until retiring in 1995. He married Patricia Welch in Rockford in 1953, she died in 1987. He married Marilyn J. Tempel in 1990. John was a member of St. Joseph's Catholic Church in Freeport until transferring to St. Thomas Aquinas Catholic Church in Freeport in May 2011. He was also a member of the Eagles and Moose Clubs in Freeport. He was an avid euchre card player. It was his passion and he played weekly at each club. He was also an avid Chicago Cubs fan. He is survived by his wife Marilyn Gibbs, grandson Adam Gibbs, daughter-in-law Teresa (Jeff Johnson) Gibbs of Freeport, brother Lain (Marilyn) Gibbs of Manchester, IA, his favorite niece Diane (Fred) Elsbury of Lamont, IA and many nieces and nephews of Iowa and Illinois. Also surviving are his stepchildren: Rod (Doris) Tempel of Lanark, IL, Linda (Richard Noto) Buss of Freeport, Randall (Sue) Tempel of Long Beach, MS, step-grandchildren: Jason (Erin) Buss of Freeport, Jesse (Courtney) Buss of Belvidere, IL, Rachel (Tony) Burkholder and Amy (Chad) Schubert all of Shannon, Stephanie Hessian of Long Beach, MS; step-great-grandchildren Ella and Levi Burkholder, Madison, Kailyn and Lauren Schubert, Kaleb and Aubree Buss, and Sloan Buss. John is predeceased by his parents, first wife Patricia, sons Sean (at birth) and Kevin, and six sisters and two brothers. Cremation rites have been accorded. There will be no visitation or funeral. Internment will be in Calvary Cemetery in Rockford. In John's memory a memorial will be established for St. Thomas Aquinas Church in Freeport. Please visit and sign John's guestbook at www.burketubbs.com.

John H. Gibbs, 88, of Freeport died Saturday May 19, 2018 at Lena Living Center. He was born December 11, 1929 in Manchester, IA to John H. Gibbs Sr. and Gertrude Scovill. At an early age he moved to Rockford and worked for Roper Co. from 1947... View Obituary & Service Information

The family of John H. Gibbs created this Life Tributes page to make it easy to share your memories.

Send flowers to the Gibbs family.