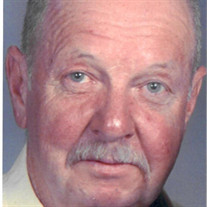 John R. Goley, age 80, a resident of Freeport, IL died Thursday August 12, 2021, at University of Wisconsin Hospital. John was born in Dixon, IL May 2, 1941. He was predeceased by his Father Leo V. & Mother Aletha A. (Love) Goley, as well as brother Leo Harold, and sister Mary Camile. He was predeceased by one child John M. in 2000. And his first wife Helen (Kerrivan) Goley. He is survived by his wife Linda M. (Weiss) and five children; two daughters Carol Goley of Ashton and Sarah (Ryan) Meador of Pecatonica, and three sons, Donald and James of Oregon, and Chris of Freeport, also survived by Special Niece Sandra and by his canine friend Willie, and grandchildren; Meghan (Jeff) Clark; Tim Wittenhauer; John M. Jr., Ann and April (Tony) Breeden; plus, Kendrick, Aubrey & Colton Meador as well as several great grandchildren. He grew up in Oregon, IL enlisting in the Navy on his 17th birthday, serving over 7 years of active duty, mostly on Diesel Submarines. Then 18 months in Military and Veterans Hospitals. He sailed on 4 oceans and many of the world’s seas. His most memorable clandestine submarine operations were Operation Mongoose chasing Russian Freighters then stationing in the Artic Ocean awaiting President Kennedy’s Order, plus 30 days submerged off Alexandria which is why the 3-day war was only three days; plus Karachi and others as well as those still classified. He later received a college degree graduating with honors. He stayed in touch with submarine organizations and attended many of their wonderful camaraderie reunions. He is a Life Member of Disabled American Veterans, Veterans of Foreign Wars, United States Submarine Veterans, as well as both the Threadfin Association and Tirante Association, USS Threadfin (SS-410) 1960-1963 great boat. John was an avid reader of submarine history especially as told by Admiral Lockwood and Ned Beach plus dozens of others. Highlights of reunions were once bunking with Capt. George Street a Congressional Medal of Honor Recipient as well as cocktails with another winner of the big award Admiral Gene Fluckey. There were 7 Submarine CMH Award winners form W.W. II. John was also an avid fisherman, he so loved his little cottage in Northwest Ontario for the too short 19 years, but the people were the most lasting impressions, God’s Country; George, Robbie, and Ivan. His office is decorated with beautiful, respected critters and fish from Canada. In 1974 he founded Goley’s Accounting Service in Freeport after serving in a Rockford Firm for a short period. Initially working out of his house while attending school, his wife Linda was more than his right hand, As Cousin Paul Foreseen, clientele grew and so did his business, going through pleasant changes and growth, the largest growth took place after Chris came onboard. The business evolved into both a Certified Public Accounting Firm as well as that of an IRS Enrolled Agency, managed by both John and Chris until John’s retirement. John was both a member of the National Society of Public Accountants and the Illinois Association of Enrolled Agents. He was a member of St. Thomas Aquinas Catholic Church; the Knights of Columbus plus B.P.O.E. Visitation will be from 4:00 p.m. – 7:00 p.m. Tuesday August 17, 2021, at Burke Tubbs Funeral Home, Freeport, with a Rosary service beginning at 3:30 p.m. also on Tuesday at Burke Tubbs. Funeral Mass will be 10:30 a.m. Wednesday August 18, 2021, at St. Thomas Aquinas Catholic Church. Visitation 9:30 a.m. until the time of service Wednesday at St. Thomas. Interment will be in Calvary Cemetery, Freeport. A luncheon and celebration of John’s life will be held at the Freeport Eagles Club (1200 West Galena Ave.) following interment. A memorial has been established for the Freeport Homeless Shelter in Mr. Goley’s memory. Please sign John’s guestbook and share a remembrance at www.burketubbs.com

John R. Goley, age 80, a resident of Freeport, IL died Thursday August 12, 2021, at University of Wisconsin Hospital. John was born in Dixon, IL May 2, 1941. He was predeceased by his Father Leo V. & Mother Aletha A. (Love) Goley, as well... View Obituary & Service Information

The family of John R. Goley created this Life Tributes page to make it easy to share your memories.

Send flowers to the Goley family.