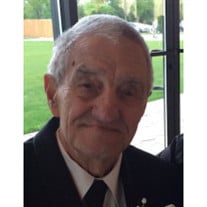 John W. Jackowski, 90, of Freeport, IL passed away Saturday, June 19, 2021 at Ascension Living Saint Joseph Village with his family by his side. He was born August 10, 1930 in Hudson, NY, the son of polish immigrants Joseph and Anna (Maiewski) Jackowski. He was a 1947 Hudson High School graduate. At the age of 17, John joined the United States Air Force where he served from 1947-1957 and was a Korean War veteran. On November 25, 1997 he married Billie Jo LeBaron in Las Vegas, NV. John worked for American Finance which brought him to the local area. However, he worked in the debt collection profession for the majority of his life. He owned Professional Collections and later owned and operated Collection Systems of Freeport, Inc. for over 30 years. He truly cared about the Freeport community, voicing his input into the Freeport party line radio show and frequently interacting with his fellow downtown Freeport business owners. In addition to fishing, golfing, bowling, and watching the Chicago Bears, he especially enjoyed metal-detecting and was proud of the many treasures he found which included reuniting area residents with their class and engagement rings. John and Billie Jo enjoyed traveling to many destinations including South Padre Island, Glacier National Park, Arizona, and Las Vegas. John is survived by his wife Billie Jo of Freeport; three sons, Wayne (Carol) Jackowski of German Valley, IL, Jim (Heather) Jackowski of Machesney Park, IL, Tom (Danell) Jackowski of St. Charles, IL; two daughters, Beth (Rodney Bennett) Jackowski of Menasha, WI, and Amy (Kirk) Alber of Cedarville, IL; and two grandchildren Jennika and Erik Alber. Preceding John in death are his parents, son John J. Jackowski, twin brother Joe Jackowski and brother Edward Jackowski. Funeral services will be Friday, June 25, 2021 at 3:00pm at Burke-Tubbs Funeral Home with Pastor Tim Spickler officiating. A visitation will be held at Burke-Tubbs from 1:00pm until the time of service. Private family burial will be in Oakland Cemetery and Mausoleum. In lieu of flowers, a memorial has been established in his memory. Please sign John's guestbook and share a remembrance at www.burketubbs.com

John W. Jackowski, 90, of Freeport, IL passed away Saturday, June 19, 2021 at Ascension Living Saint Joseph Village with his family by his side. He was born August 10, 1930 in Hudson, NY, the son of polish immigrants Joseph and Anna (Maiewski)... View Obituary & Service Information

The family of John W. Jackowski created this Life Tributes page to make it easy to share your memories.

Send flowers to the Jackowski family.