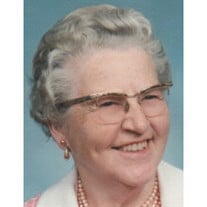 Josie F. Arjes, 100, of Forreston, died Sunday November 4, 2018 at Lena Living Center. She was born March 1, 1918 in Kenosha, WI, the daughter of John and Ethel J. (Blanchard) Feltman. Josie married Plummer A. Arjes on May 21, 1940 in Cedar Rapids, IA by Rev. V.C. Grant; he died December 26, 2001, To this union was born a daughter Vera J. and son George H. Josie graduated from Brown's College of Commerce in Freeport, IL. After graduation Josie did Secretarial work in several places in Freeport. Josie and her husband Plummer started working under Civil Service at the Savanna Ordnance Depot in 1940. After moving back to Forreston in 1945 she worked at several places in Freeport including Micro Switch for 8 ½ years before moving to Peoria, IL in 1963. In Peoria Josie began work at Caterpillar in July 1963 and retired July 1, 1980, and then both she and her husband returned to Forreston. Josie and Plummer enjoyed and were accomplished ballroom and square dancers. Josie was a member of the Order of the Eastern Star from April 1947 to the time of her death. She became a 50 year member of the Order in 1997. She became a Grand Lecturer of the Order in 1952, and was an active member for many years in Eastern Star. She had been active in churches in the various communities where they lived and was a member of the First United Methodist Church, Forreston, IL. Josie is survived by her daughter, Vera (Nick Losco) of Freeport, her grandchildren, great-grandchildren, great-great-grandchildren, and great-great-great grandchildren. She was preceded in death by her husband; her son George H. Arjes; granddaughter, Diedre A. Arjes; a sister, and a brother. Funeral services will be 10:30 A.M. Saturday November 10, 2018 at Burke-Tubbs Funeral Home in Freeport with Rev. Dr. Willis Schwichtenberg officiating. Visitation will be 9:00 A.M. until the time of service. Burial will be in White Oak Cemetery in Forreston. In lieu of flowers a memorial has been established in her memory. Please visit www.burketubbs.com to sign Josie's online guestbook and to share memories.

The family of Josie F. Arjes created this Life Tributes page to make it easy to share your memories.

Send flowers to the Arjes family.