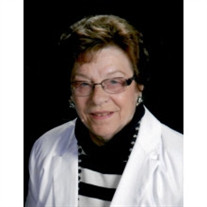 Judith Marie Busjahn, age 77, of Freeport, IL, passed away July 1st, 2020 at home surrounded by her family after losing her battle with cancer. She was born October 9, 1942 at the family home in Freeport, IL to Paul & Leita (Brown) Wolf. She was the youngest of three daughters. She went to grade school in Winneshiek, IL and high school in Dakota, IL, graduating in 1960. Judith worked at Freeport Insurance Company, Structo and State Bank of Freeport until 1968, when she married Edward L Busjahn on September 14,1968 who also adopted her two daughters. Together they worked a farm in Rock City, IL for seven years, after which they purchased a farm in Buena Vista, IL where they still reside today. Judith was a God centered woman, who was strong in her faith and a prayer warrior for her family. She loved her farm life and taking care of her calves. She loved gardening and watching her birds. She also loved baking and became well known for her pies which were requested often for church and family functions. Judith was a member of Cedarville Emmanuel Church. She served the Lord in many capacities throughout her life. She was a singer with the Chapel Singers for 30 years, she taught Sunday School and served as a Youth Group leader with her husband. Judith is survived by her husband Edward L Busjahn, daughter's Lorna (Randy) Schindler of Orangeville, IL, and Debra (Robert) LaFurge Jr. of Byron, IL. Grandchildren Paul (Sara) Schindler, Scott (Angela) Schindler, Mark Schindler, Nicole (Michael) Bloom, and Brandon LaFurge. Four great-grandchildren, Jailynn, Kennedy, Mason, and Kaylin. She is also survived by two sister's, Phyllis Weisel and Nola (Ernie) Miller. Judith was preceded in death by her parents and brother-in-law's Roger Remmers and Norman Weisel. Visitation and Funeral services will be held at Cedarville Emmanuel Church in Cedarville, IL. Visitation will be on Monday July 6, 2020 from 4:00 p.m.- 7:00 p.m. and funeral services will be 11:00 a.m. Tuesday July 7, 2020. Rev. Craig Conner and Troy Watson will officiate. Burial will be at the Cedarville Cemetery on Red Oak Road. Following the burial there will be a luncheon held at Cedarville Emmanuel Church. Memorial funds will be distributed to FHN Hospice and Gideon International Bible. Please sign Judith's guestbook and share a remembrance at www.burketubbs.com

Judith Marie Busjahn, age 77, of Freeport, IL, passed away July 1st, 2020 at home surrounded by her family after losing her battle with cancer. She was born October 9, 1942 at the family home in Freeport, IL to Paul & Leita (Brown) Wolf. She... View Obituary & Service Information

The family of Judith Marie Busjahn created this Life Tributes page to make it easy to share your memories.

Send flowers to the Busjahn family.