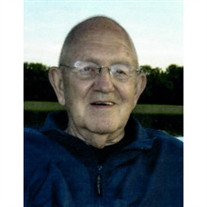 Lawrence "Larry" Raymond Casey passed away peacefully surrounded by family on February 4, 2021. Larry was born in Freeport, Illinois on February 24, 1941, the first of four children for Raymond and Florence (Fink) Casey. Larry attended Aquin High School where he played football and basketball, but more importantly where he met the love of his life, Susan Wonder. They married on February 23, 1963, and together raised five children. Larry attended Loras College and University of Illinois. Throughout his life, he worked for the Illinois Central RR, Kelly Springfield Tire, and ultimately Micro Switch/Honeywell. He was an active member of St. Thomas Parish. Earlier in his adult life, Larry enjoyed playing fast pitch softball and weekly games of pick-up basketball with a group of close friends. His love of basketball would carry over to years of coaching youth basketball. He coached each of his children, one of his grandchildren, and countless others. Larry loved to fish. Throughout his lifetime, he taught not only his five kids to fish, but also every one of his thirteen grandchildren. He was known to show up at the hospital to meet a new grandchild with their first fishing rod in hand. His skills as a grandparent were something to behold, eventually leading his family to refer to him as "the baby whisperer". Grandpa Larry always seemed capable of calming an upset baby by simply picking them up and holding them close. His belly was a coveted napping spot for each and every one of his grandkids and great grandkids. Larry also loved to meet friends to play cards. He was a loyal Chicago Cubs fan and a gifted storyteller. His sense of humor was second to none, and one of the greatest gifts he passed on to his kids. Larry is survived by his wife, Susan; children, Michael (Trish) Casey, Kate (Mick) Gronewold, Ann (Jeff) Krogull, Steve (Mary) Casey, Ryan (Allyson) Casey; sisters, Judy (Mike) Cook, Marilyn (Wally) Andrus, sister-in-law Eva Casey; grandchildren, Kaitlyn (Eric), Kileen (Aaron), Maeve , Seth, Megan (John), Elisabeth, Casey, Claire, Aaron, Henry, Nora, Liam and Ben; great grandchildren, Eloise, Colin and Kelly; and numerous nieces and nephews. Larry was preceded in death by his parents and brother, Russell. A private family funeral will be held for Larry, with a celebration of his beautiful life to be held at a later date. In lieu of flowers, please consider a donation in his memory to St. Jude Children's Research Hospital. Please sign Larry's guestbook and share a remembrance at www.burketubbs.com

The family of Lawrence "Larry" Raymond Casey created this Life Tributes page to make it easy to share your memories.

Send flowers to the Casey family.