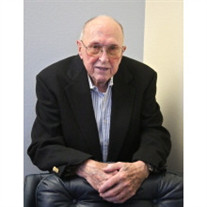 Leonard Burdette Bastian, 95, passed away peacefully on Saturday, March 2, 2019, at Liberty Village of Freeport-Manor Court, with family by his side. Leonard was born March 31, 1923, to Oliver and Ruth (Moring) Bastian in Freeport. He grew up on the family farm in Shannon, and graduated from Freeport High School in 1941. Leonard married Janet Elaine Baxter on August 24, 1941, in Kahoka, Missouri. He farmed and sold insurance until moving to Iowa to become a district and division manager for Archer Petroleum Corporation. He later became the general manager for Archer Petroleum, a subsidiary of Witco Corporation, and moved to Omaha, Nebraska, to work from the headquarters. After retiring, Leonard and Janet returned to Freeport. Leonard was a community leader throughout his life, serving with the Shannon School Board, First Lutheran Church Council, Lions Club, Toastmasters, Kiwanis and the Farm Bureau. Leonard traveled to every corner of the country and he and Janet enjoyed trips to many places, including California, the Ozarks and Canada, over their more than 70 years of marriage. He had a great memory and respect tor family history, finding many opportunities to bring extended family together, such as to commemorate the 150-year anniversary of the original Bastian family farm in 2013. Leonard was fascinated by mechanics, including steam engines and trains, and had his own miniature model tractor collection. While an avid reader, Leonard was also very sociable and could start a conversation with anyone. He maintained many active, long-term friendships, and organized the ROMEO (Retired Old Men Eating Out) men's group, which met weekly for many years. Leonard is survived by two sons, Merek of Shannon and Linden (Deborah) of Oklahoma City, Oklahoma; two daughters, Jalinda (Tom Funke) of La Jolla, California, and Janelle (Rick) McLean of Valencia, California; brother Robert of Freeport; loving companion Jane Lehman of Freeport; four grandchildren, four great grandchildren and several nieces and nephews. He was preceded in death by his parents, wife Janet, daughter Melissa Bastian Nebelsick, son-in-law Arnold Nebelsick, daughter-in-law Judith Wyss Bastian, sister Mary Johnson, brother-in-law Albert Johnson, sister-in-law Helen Bastian, niece Carolyn Johnson Deininger, and nephew Joel Johnson. Funeral services will be 10:30 A.M. Saturday March 23, 2019 at Burke-Tubbs Funeral Home, Freeport. Visitation will be from 3-7:00 P.M. Friday March 22, 2019 also at Burke-Tubbs, Freeport, and from 10:00 until the time of service on Saturday. Burial will be in Chapel Hill Memorial Gardens. You may honor Leonard with a charitable contribution in his name to the FHN Foundation or First Lutheran Church.

Leonard Burdette Bastian, 95, passed away peacefully on Saturday, March 2, 2019, at Liberty Village of Freeport-Manor Court, with family by his side. Leonard was born March 31, 1923, to Oliver and Ruth (Moring) Bastian in Freeport. He grew... View Obituary & Service Information

The family of Leonard B. Bastian created this Life Tributes page to make it easy to share your memories.

Send flowers to the Bastian family.