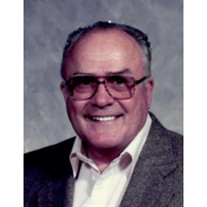 Lloyd George Smith, 89, of Freeport, died Monday January 27, 2020 at home with his children and granddaughter by his side. Lloyd was born June 1, 1930 in Milwaukee, WI, the son of Frances S. Owen and LeRoy J Smith. Lloyd married his beloved Lorna Luebbing on January 8, 1949 in Freeport. He was a 1949 graduate of Freeport High School. Along with his wife, Lloyd owned Lloyd G Smith Carpets in Freeport for 65 years. In high school, Lloyd was a star athlete in the football and track programs, and he still holds a Freeport High School track record in hurdles. He received the Glenn "Pat" Holmes recognition award presented by the Pretzel Fan Club for leadership and athletic character in 1997. He served for 10 years as President of the Freeport School Board. For 12 years (1999-2011), he served on the Zoning Board of Appeals Committee for the City of Freeport. Lloyd achieved the highest degree granted in Scottish Rite Freemasonry and was a member of the Freeport Evergreen Lodge #170. Tebala Shrine of Rockford and Rotary International, he was a Paul Harris Fellow, were other organizations in which he participated for many years, as well as managing the free wheelchair program for Freeport High Twelve. He was an avid collector of Volkswagens and an expert in restoration as was recognized in Volkswagen Group's corporate magazine. He is survived by his sister Marlene Swank, and three daughters, Debra (Rich Nickel) Cain, Julie Smith of Golden, CO, and Dena (Robert) Burke. There are also two granddaughters Mandi Cain and Claire Burke, and three great-grandchildren Alec Smith, Elijah Cain, and Violet Rose Burke. Lloyd was preceded in death by his parents, his son Steven E Smith; grandson Justin H Smith; brother Roy Smith, and sisters Rose Spencer and Lyla Becke. Funeral service will be Friday Jan 31st at Burke Tubbs Funeral Home with visitation from 4:00 p.m. to 6:00 p.m. and the service immediately afterwards. Burial will be at Oakland Cemetery. In lieu of flowers memorials have been established for the Freeport High School athletics department and Highland Community College athletics department.

Lloyd George Smith, 89, of Freeport, died Monday January 27, 2020 at home with his children and granddaughter by his side. Lloyd was born June 1, 1930 in Milwaukee, WI, the son of Frances S. Owen and LeRoy J Smith. Lloyd married his beloved... View Obituary & Service Information

The family of Lloyd G. Smith created this Life Tributes page to make it easy to share your memories.