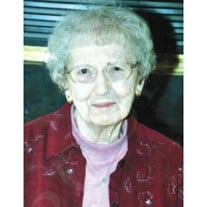 Lois G. Eickman, 100, of Pinecrest Manor, Mt Morris, Illinois passed away Wednesday July 31, 2019. Lois was born May 19, 1919 in Rockford, IL the daughter of Wilbur & Grace (Palmer) Light. She celebrated her 100th birthday with her family. She attended a one room school house in Leaf River and was a graduate of Leaf River High School in 1936. Lois married Kenneth Eickman on August 5, 1939 in Leaf River. Lois lived on a farm in Leaf River and worked at Watt Publishing-Kable Mt Morris, Jo Daviess Farm Service in Elizabeth, and also owned and helped operate with her husband the Elizabeth Food Mart from 1972 until retiring in 1985. Lois was a member of the Leaf River United Methodist Church and attended Elizabeth United Methodist Church. She also was a member of Elizabeth Lioness Club, the UMW Women's club and local book and card clubs. Lois had many interest including gardening, traveling, bird watching, doing crosswords, playing dominoes and the piano, reading and visiting with family, nieces &nephews and friends. Above all she loved the time she spent with her family and grandchildren, especially the all family annual June weekend at Eagle Ridge, Galena, IL. She was an avid Cubs Fan and was very happy when they won the World Series in 2016. She is survived by her son, Roger (Sharri) Eickman of Geneseo; four grandchildren, Tim (Jodi) Hare, Michael Hare, Kyle (Jamie) Eickman & Renee Eickman (Craig), five great-grandchildren, Trevinn, Zachary (Margaret) Katelynn Hare; Kenneth C. Eickman & Elsie Eickman. Lois was preceded in death by her husband, Ken, daughter, Bev Hare, son-in-law, Bill Hare and brothers Wiley Light, Don Light, and a sister Virginia. A celebration of life will be held at 10:30 A.M. Thursday August 8, 2019 at Burke-Tubbs Funeral Home in Forreston. A visitation will be held from 9:30 A.M. until the time of service. Burial will be in Twelve Mile Grove Cemetery in Pecatonica at a later date. In lieu of flowers a memorial has been established in her memory. The family would like to thank the staff at Pinecrest for the love, care, and support given to Lois.

Lois G. Eickman, 100, of Pinecrest Manor, Mt Morris, Illinois passed away Wednesday July 31, 2019. Lois was born May 19, 1919 in Rockford, IL the daughter of Wilbur & Grace (Palmer) Light. She celebrated her 100th birthday with her family. She... View Obituary & Service Information

The family of Lois G. Eickman created this Life Tributes page to make it easy to share your memories.

Send flowers to the Eickman family.