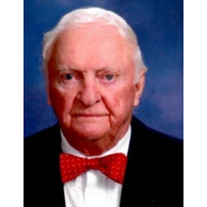 Lyle J. Reedy, 96, a long-time educator and administrator, died February 5, 2020, at Parkview Home in Freeport. He was born December 26, 1923 in Freeport to Charles R. and Myrtle (Rutter) Reedy. He and Joyce L. Staples were married December 24, 1946 in Canton, Illinois. After graduating from Freeport High School (FHS) in 1942, he enlisted in the US Navy and proudly served his country during WWII. He served 27 months in the South Pacific. He graduated from Bradley University in Peoria in 1949 with a BS in Industrial Education and a Master's Degree in 1950. He began his career in education in 1950 as an Industrial Arts teacher at Freeport Jr. High (FJH). He served as Assistant Principal at FJH and Assistant Principal of FHS, returning as Principal of FJH. He helped establish Carl Sandburg Middle School and served as Principal for 13 years before retiring. Many former students and teachers have thanked him immensely for his fairness and guidance while they were students or teachers. Lyle will be remembered for his service to the community. Memberships included Freeport Park District Board, VP of the IL Association of Park Districts, President of the United Way Board, Junior High School Association of IL, Freeport Noon (Golden K) Kiwanis, Lt. Gov. I-I District, Kiwanis International and United Way General Campaign Chairman. Lyle was also involved with the Kings' Daughter Board, YMCA, a 50-year member of Ancient Accepted Scottish Rite Bodies of Freeport and Evergreen Lodge, a Life Member of AmVets, Post 0032, VFW, Post 998, Freeport Elks Lodge and Freeport Order of Eagles. He was a member of Second Presbyterian Church where he served as Trustee and ordained elder and most recently a member of Bethany United Church of Christ. Aside from being an avid golfer, he enjoyed traveling to many countries of the world and had a passion for dancing at the Germania Club. Surviving are his son Dr. Chad (Ann) Reedy of Freeport and granddaughter Aly Reedy of Chicago; a special friend Joan Morton; nephews David (Marlene) Trickel of Florida, Larry Trickel of Wisconsin, Jack Symanek of Maryland, and Peter (Julie) Turner of Ohio. Preceding him in death were his parents, wife Joyce, three sisters and two brothers. Funeral services will be held on Saturday, February 15, 11:00 a.m., at Bethany United Church of Christ with the Rev. Ted Michalsen officiating. Burial will be at Oakland Cemetery and Mausoleum. Masonic Rites afforded prior to Visitation from 4-7 p.m. at Burke Tubbs Funeral Home on Friday, February 14. Visitation also at 10 a.m. until time of service Saturday. In lieu of flowers, memorials have been established for Freeport Community Public School Fund and Bethany Church. Please sign Lyle's guestbook and share a memory at www.burketubbs.com

Lyle J. Reedy, 96, a long-time educator and administrator, died February 5, 2020, at Parkview Home in Freeport. He was born December 26, 1923 in Freeport to Charles R. and Myrtle (Rutter) Reedy. He and Joyce L. Staples were married December... View Obituary & Service Information

The family of Lyle J. Reedy created this Life Tributes page to make it easy to share your memories.

Send flowers to the Reedy family.