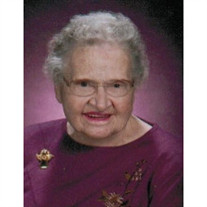 Mabel E. Yeagle, 96, of Dakota, died Friday, June 7, 2019 at Monroe Clinic Hospice Home. Mabel, the daughter of George and Alice (Good) Lawver, was born October 13, 1922 in Cadiz, Township, Green, County, Wisconsin. She was the last remaining member of her nine siblings. She graduated from Monroe High School and continued her education at Green County Teachers College, graduating in 1942. She taught all grades in a one-room country school in Green County. On January 31, 1943, Mabel and Theron Yeagle were united in marriage. They celebrated 62 years together. He preceded her in death in 2005. From this union, five children were born, Robert, Henry, Dean. Kay and Carol. She and her husband raised dairy and beef cattle together on the family farm. Mabel and Theron spent many winters in Texas. They greatly enjoyed camping and were members of the Northern Illinois Retirees Camping Club. She enjoyed crossword puzzles, and she was known for playing cards and board games with family and friends. During her Texas winters, Mabel won numerous trophies in both group and individual tournaments for shuffleboard, dominoes, and several styles of card games. She was always teaching her family new games she learned in the RV Park; she had a competitive spirit and played cards with her hospice companions until her final days. Surviving members include her children, Robert (Pam) Yeagle, Dean (Carla) Yeagle, and Kay (Larry) Miller; grandchildren, Christopher (Sue) Yeagle, Rob Yeagle (Wendy) and Colleen Miller; great-grandchildren, Danica Fong, Bobby Yeagle, and Makena Yeagle. Also surviving are many nieces, nephews, and step-grandchildren. Mable was preceded in death by her parents, husband, Theron; son, Henry (2017) and infant daughter, Carol; brothers, Robert, Harold, Glen, and George Lawver; sisters, Nellie Berget, Francis Babler, Irene Siedschlag, and Catherine Gissing (Catherine, her youngest sister died just two weeks prior). The family wishes to thank the staff of Monroe Hospice Home for the compassionate care given during her illness. A thank you to special neighbors, Delmar and Belva Schulz for their unlimited kindness. Funeral services will be 11:00 a.m. Saturday June 15, 2019 at Cedarville Emmanuel Church. Rev. Dennis Buss will officiate. Visitation will be 9:30 a.m. until the time of service at the church. Burial will be in Orangeville Cemetery. A memorial has been established in Mabel's memory. Please sign her guestbook and share a remembrance at www.burketubbs.com

The family of Mabel E. Yeagle created this Life Tributes page to make it easy to share your memories.

Send flowers to the Yeagle family.