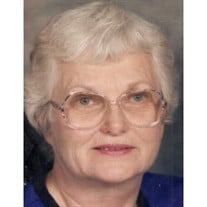 Mary V. Robbins, 89, of Freeport, passed away from Alzheimers disease on July 30, 2018 at Nazareth House Nursing Home in Stoughton, WI. Mary was born on May 30, 1929 in Stockton, Illinois. She is the daughter of E. Copeland and Odessa (Flickinger) Troxell. Mary was a graduate of Pearl City High School. She attended Deaconess Hospital School of Nursing in 1950 and her first position as an RN was at the Illinois Central Hospital in Chicago. She then returned to Freeport and worked in the nursery at Freeport Memorial Hospital for many years. She later worked for the Stephenson County Health Department. Mary also worked in hospitals in Charlotte Amalie, St. Thomas, Virgin Island and at Charity Hospital in New Orleans, LA. Mary wedded the love of her life, Willard D. "Curly" Robbins on February 21, 1953, at Embury United Methodist Church in Freeport. She was a lifelong member of Embury United Methodist Church in Freeport and was a former Center School PTA president. Mary loved to garden with her husband, and they canned fruits, juices and vegetables. She was an exceptional cook and enjoyed preparing delicious meals for her family and friends. Mary enjoyed playing cards, spending time with her grandchildren and traveling. She had a kind and generous spirit and a terrific laugh. She was a wonderful grandmother, a loving wife and mother. Mary lived out her Christian faith in her words and deeds and now she is home with her Lord. Mary is survived by her son, Willard D "Bill" (Beth) Robbins II; three grandchildren, Keely Jeppson (Thor) Madison, WI, Willard D."Will" (Emily) Robbins III Waukesha, WI and Levi Robbins of Stoughton, WI. She was preceded in death by her parents, E. Copeland and Odessa (Flickinger) Troxell, two brothers, Harland (Jean) Troxell, Edward (Luceria) Troxell, both of Arizona; and one sister, Maxine (Lloyd) Myers of Loran, IL. A special thanks goes to Nazareth House staff for the great care they gave Mom over the last four years. Funeral services will be 11:00 A.M. Saturday August 4, 2018 at Burke-Tubbs Funeral Home in Freeport. Visitation will be from 10:00 A.M. until the time of service. Burial will be in Chapel Hill Memorial Gardens Condolences and online guestbook may be signed at www.burketubbs.com. A memorial donation to find the cure for Alzheimers disease is located at alz.org Love you, Mom! We'll all see you later.

Mary V. Robbins, 89, of Freeport, passed away from Alzheimers disease on July 30, 2018 at Nazareth House Nursing Home in Stoughton, WI. Mary was born on May 30, 1929 in Stockton, Illinois. She is the daughter of E. Copeland and Odessa (Flickinger)... View Obituary & Service Information

The family of Mary V. Robbins created this Life Tributes page to make it easy to share your memories.

Mary V. Robbins, 89, of Freeport, passed away from Alzheimers...

Send flowers to the Robbins family.