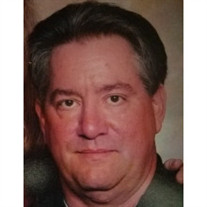 Michael Thomas Labellarte, 64 of Shannon, died, Wednesday, November 13, 2019, unexpectedly. Mike was born on February 4, 1955 at St. Ann's hospital in Chicago, IL. he is the son of Thomas and Phyllis (Anderson) Labellarte. Mike married Marla Muldoon on February 14,1983. She died on February 4, 2001. Mike worked for Mark controls, in Evanston, IL. He later went on to own Business Efficiency Aids, Inc in Skokie, IL; and Arte Graphics in Des Plaines. For the last 19 years after meeting Debbie he lived in the Shannon area on a farm Planting grapevines and harvesting grapes, making wine, hay,raising animals and making amazing memories. Mike was a caregiver foremost taking care of his wife when she became ill with Multiple Sclerosis and took special care of Ashley Leary for the past 19 years. Mike enjoyed the outdoors and his 1988 Jamboree motorhome, camping, fishing. Motorcycling was a passion. He went on many cross country rides with his VROC Kawasaki motorcycle group. He loved CB and Ham radios and loved to see how far away he could broadcast. Mike also liked hunting and had recently taken up bow hunting. He loved his old red IH tractor. He had a passion for the 2nd amendment and loved his rifles, revolvers and shooting with precision. Mike loved his dog Cooper. Survived by his son, Thomas Michael Labellarte; significant other, Debbie Hahn and her daughter Ashley Leary; parents, Thomas and Phyllis Labellarte; sisters, Tina Labellarte, her children, Ken Heinz and Jessica (Rob) Wunder, sister, Janice Beatty (Marty) her children, Danielle (Jason) Patel and Kate Dawson; brother, John Labellarte (Sharon) their children Gina, Joe and Dominic Labellarte. Visitation will be 3:00 P.M.-7:00 P.M. Wednesday November 20, 2019 at Burke-Tubbs, Freeport. In lieu of flowers a memorial has been established in his memory. Please sign Michael's guestbook and share a memory at www.burketubbs.com

The family of Michael T. Labellarte created this Life Tributes page to make it easy to share your memories.

Send flowers to the Labellarte family.