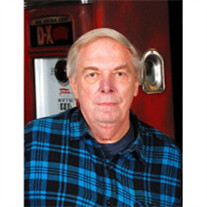 Michael Charles Roberts, age 68, died in his home on Friday, July 24, 2020. Mike was born May 18, 1952, to Charles W. Roberts, Jr. and Lois Arnold Roberts at Saint Frances Hospital in Freeport, IL, delivered by Dr.John Linden. It was a complicated, dangerous pregnancy. Lois was told it was not likely she'd carry the baby to term. After Mike was born, the Sisters of Saint Francis knelt and prayed at the bedside for the survival of mother and baby. When Mike went to Dr. Linden 18 years later for his Navy physical, his mother said, "Be sure and remind him who you are!" Mike, a fun-loving but indifferent student, graduated from Aquin Central Catholic High School, a member of the class of 1970, which was scheduled to celebrate their 50th Class Reunion this summer . He never cared much for gatherings which required him to dress up and now he has the ultimate reason to skip it. He joined the Navy in the Fall of 1970 during the Viet Nam Era and served aboard the USS Biddle CG-14 from 1970 to 1974 as an Engineman Third Class. Mike enjoyed collecting Navy memorabilia, particularly that of the Biddle. Upon returning home, Mike joined the Stephenson County Sheriff Department where he served for 25 years, following a family tradition of police service, as his grandfather and father, Charles Sr. and Charles Jr. were long-time Freeport Police officers. Mike enjoyed a long and leisurely retirement and the company of friends made at various watering holes around Freeport where he was known for his sarcastic wit. Mike could be found at the end of the bar, laptop open, sharing and sending jokes that he found online. He always had a pocket full of candy or mints to share. Fridays found him wherever there was karaoke. He never sang but enjoyed listening to others, especially Russ. Left to mourn Mike's passing and miss him are his slightly older and much wiser sister, Norma, and his favorite brother-in-law, the brother he never had, Russ Thruman, their sons and families, Michael Thruman and his children, Claire and Matthew of Freeport and Matt Thruman, his wife, Shannon and their children, Cash and Sarah Kate of Westlake, Winnebago IL. Mike's favorite dog, Barney the Boxer, will miss Uncle Mike dropping by Norma and Russ's kitchen on Sunday mornings to read the newspapers and bring gifts that Mike knew we'd like, things he found while out shopping or online; braunschweiger from Mt. Horeb, dog toys, kitchen gadgets for Norma, fiery jalapeño pickles and olives for Russ, and personalized presents for their grandchildren. New backpacks for school with their embroidered names arrived for Cash and Sarah after he died. He had a generous, if sometimes, cantankerous, spirit. Mike will be fondly remembered by special friends, Jaci, Nora and Quinn Ogden. Mike was preceded in death and joyfully greeted at the Gates of Heaven by his parents, Charlie and Lois, and grandparents, Charles Sr. and Clara (Edler) Roberts. After a private service for immediate family officiated by Fr. Ken Anderson, and American flag presentation by the Navy Honor Guard from Great Lakes IL, Mike will be laid to rest with his parents In the *Catholic Garden* of Chapel Hill Cemetery where he will have eternity to consider the years he missed Mass. (The joke's on you, Mike!). Due to Covid-19 restrictions, a Celebration of Life gathering will be arranged and announced at a future time. We look forward to exchanging stories with Mike's friends when it's safe to do so. To remember Mike, please be a welcoming friend to the stranger at the bar, give a few dollars to someone in need with no expectation of repayment, shop online late at night for gifts that clearly say 'I love you' without words, and raise a cold Busch Light to say, "See you later, Mike."

Michael Charles Roberts, age 68, died in his home on Friday, July 24, 2020. Mike was born May 18, 1952, to Charles W. Roberts, Jr. and Lois Arnold Roberts at Saint Frances Hospital in Freeport, IL, delivered by Dr.John Linden. It was a complicated,... View Obituary & Service Information

The family of Michael C. Roberts created this Life Tributes page to make it easy to share your memories.

Michael Charles Roberts, age 68, died in his home on Friday,...

Send flowers to the Roberts family.