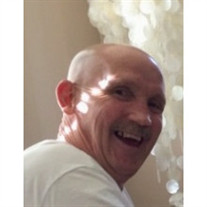 Michael William Steinhauser, 59, of Freeport, died Sunday October 20, 2019 in his home. Mike was born December 28, 1959 in Moline, Illinois, the son of William and Una (Taylor) Steinhauser. Mike married Erin McKee May 15, 1982 in Freeport. He worked for John Deere in Moline, Miller Transport, and owned and operated his own dry walling company for almost 40 years. He was a lifetime member of Embury United Methodist Church. Mike was an avid Chicago Bears fan; one of his highlights was shooting pool with Walter Payton during the 1985 season and acquiring all of the Bears autographs. Above all quality family time meant the most to Mike, especially with his beloved wife, Erin. Surviving is his beloved wife, Erin Steinhauser of Freeport; son Michael Steinhauser of Orangeville; three daughters, Brooke (Erik) Davis of Lake Carroll, Emma Steinhauser (Nick Brugger) of Monroe, and Blythe Steinhauser (Tyler Keister) of Freeport; brother, Edward Steinhauser; sisters, Elizabeth Moore, Marie Sears, Susan Steinhauser, and Lori Steinhauser; and three grandchildren, Grayce, Michael, and Damian. Mike was preceded in death by his mother, Una; and father, William Steinhauser. Memorial services will be 11:00 a.m. Wednesday October 23, 2019 at Embury United Methodist Church. Pastor Eddie Eddy will officiate. Visitation will be 10:00 a.m. until the time of service at Embury. Immediately following memorial services a luncheon will be held at the Freeport Eagles Club. A memorial has been established in his Mike's memory. Please sign his guestbook at www.burketubbs.com

The family of Michael William Steinhauser created this Life Tributes page to make it easy to share your memories.

Send flowers to the Steinhauser family.