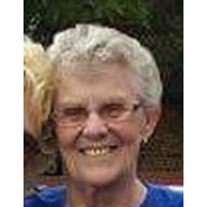 Patsy "Pat" Ann Vincent, 92, passed away peacefully on October 11, 2020, at Lake Hallie Memory Care in Chippewa Falls, WI where she had resided since June 2017 when she broke her hip again, and dementia became a bigger factor in her life. She was born to Harold and Beulah (Brooks) Rundall on August 31, 1928 in Freeport, IL. She was very involved in singing and dance as a child. Her mom handmade all her costumes. Being the youngest sibling with two older brothers, she always said she was spoiled and catered to. She married Leroy Paul "Tug" Rademaker in 1945 and had two children, Lana and John. She and Tug were poor, but young and in love. They worked together to care for their family - washing and waxing cars to make extra money. Tug died in 1955, leaving Pat to care for her children. She worked two jobs while her parents held down the fort. Pat was always a hard worker and never shirked from her duties and what was the right thing to do. Pat married Harold O. Woolever "Monte" in 1956. They purchased the Star Bowl in Freeport and operated it for several years before moving on to other ventures. They moved their family from coast to coast following different business opportunities before moving back to Freeport in 1964. Pat returned to Micro Switch at that time and worked there until her retirement in 1985. Pat became a very good bowler over the years and used a 16 pound ball to carry her 168 average. She also enjoyed golfing, singing and card playing. She was an active member of the Methodist church and sang in the choir. She was a member of the Sweet Adelines and also sang with the Emery Meeker Orchestra. She also was a volunteer who visited the homebound elderly in Freeport. She always had a smile and a loving, kind nature. She passed this warmth to everyone she met. Monte had a heart attack in 1982 and passed away. Pat then met and married James Vincent in 1984. They became avid walkers and would walk to McDonald's for coffee every morning no matter what the weather. They kept busy making crafts in the basement. Jim would create the wood crafts and Pat would paint them. They enjoyed going to craft sales to sell their wares and to visit with people. Jim died in 1989 of an aneurysm, but Pat never gave up living or having hope. She met Robert Miller "R.C" and they spent the next 17 years traveling and spending the winters in the Arizona sunshine. They were very active in the club house, swimming, playing shuffleboard, etc. She added R.C.'s adult children, Craig and Melanie and their families, to her list of loved ones. Her heart's capacity for love was huge. After R.C. died, Pat sold her home and moved to a senior citizen building in Merrill, WI to be near her daughter. She thrived and was very active. She volunteered and socialized until 2017 when she and Lana moved to Chippewa Falls where they lived together as bachelorettes, until she became incapacitated. Since neither of them enjoyed cooking, their main meal choice was ice cream. Pat was a good, kind, and loving woman. She instilled in her children the importance of hard work, honestly, family, and doing what is right. She loved and was loved. Pat was preceded in death by her parents; brothers, Richard and William; her loving husbands; and grandson, Steven Lowe. She is survived by her daughter, Lana Lowe Moltzen (Mark) of Chippewa Falls; son, John Rademaker Woolever (Karen) of El Cajon, CA; adopted children, Craig Miller (Linda) of Coal Valley, IL and Melanie Miller of Freeport, IL; grandchildren, Michael Lowe of Chippewa Falls, Kyle Woolever of El Cajon, CA, and Nicole Woolever Morin (Robert) of El Cajon, CA; grand-daughter-in-law Cindy Lowe, great-grandchildren, Brooke and Hailey Lowe (children of Cindy and the late Steven Lowe) of Wisconsin Rapids, WI, Hudson Woolever (Kyle) of Winnipeg, Ontario, and Connor Morin (Nicole) of El Cajon, CA. In lieu of flowers, the family would appreciate a gift to either Lake Hallie Memory Care for the residents or St. Jude's Hospital for Children. Pat would be pleased with these choices.

Patsy "Pat" Ann Vincent, 92, passed away peacefully on October 11, 2020, at Lake Hallie Memory Care in Chippewa Falls, WI where she had resided since June 2017 when she broke her hip again, and dementia became a bigger factor in her life. She... View Obituary & Service Information

The family of Patsy "Pat" Ann Vincent created this Life Tributes page to make it easy to share your memories.

Send flowers to the Vincent family.