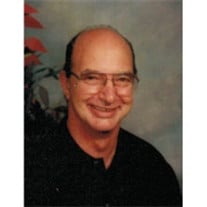 Paul Eugene Leopold, 83, of Freeport, died peacefully, Thursday January 17, 2019. Paul was born November 15, 1935 in Freeport, IL, the son of Paul and Gertrude (Cary) Leopold. He married Marilyn Bigelow on August 27, 1955 at St. Joseph Catholic Church in Freeport. Paul was a member of St. Thomas Aquinas Catholic Church. For many years, he would pack up his family every Friday after he got off work and headed to Fish Lake to camp for the weekend. Many memories were made there. He took his role of protector of his family very serious. Paul never complained and occasionally tried to hide how he was feeling to spare his family of worry. Paul is survived by his four daughters, Karen (Steve) Dougherty and Rose (Rick) Bear both of Freeport, IL Teresa (Kathy) Leopold of Beloit, WI, and Lisa (Joe) Pettit of Cedarville, IL; brother, Russell Leopold; grandchildren Chris Dougherty, Mark (Linda) Dougherty, Ryan (Kristi) Bear, Nicole (Eric) Aspenson, Tony Pettit, Mike (Courtney Blair) Pettit, and Sierra Pettit; great-grandchildren Laken and Harper Bear, Tyler and Avery Aspenson; and many nieces and nephews. Paul was preceded in death by his parents, wife, Marilyn; and brother, Donald Leopold. Private family services will be held. A memorial has been established in Paul's memory. Please sign his guestbook and share a remembrance at www.burketubbs.com

The family of Paul Eugene Leopold created this Life Tributes page to make it easy to share your memories.

Send flowers to the Leopold family.