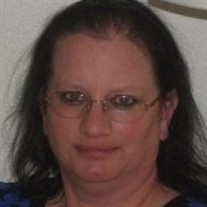 Not sure what to send?

Penny Sue Mon, 56, passed away Saturday, January 8th 2022 at KSB hospital unexpectedly. Penny was born April 6th, 1965 in Freeport, IL to Clara Knopp (Ketchem) and Roger Meyer Sr. She attended Leaf River schools and received her G.E.D and later attended Sauk Valley Community College. Penny married her life-long love Gary Mon in their home in Polo, IL. Penny worked at Shopko in Dixon until they closed, and she went into an early retirement. Penny is survived by daughter, Brandy (Chad) Meyer of Milledgeville, IL: five siblings, Pam (Lance) Painter of Bricelyn MN., Roger (Glenda) Meyer of Mt Morris, IL., Scott Mon of Perry Ok., Dawn (Val) Stephenson of Perry, OK., and Melissa (Michael) Cooper of Perry, OK. One grandson, Noah Oldham along with several cousins, nieces and nephews and some great nieces and nephews Penny is preceded in death by her husband Gary Mon, mother Clara Knopp and father Roger Meyer Sr. While in retirement, Penny enjoyed time listening to Elvis Presley and any other 80’s rock music she could. She also spent most of her life collecting anything cow related. Penny had a found love for baking. Any birthday or celebration, Penny had a cake pan for. She also enjoyed casual baking and cooking, usually enough to feed an army. She would disperse everything out evenly amongst anyone that walked through her doors. There was not ever a stranger to Penny. She loved everyone she met unconditionally. Her house was always full of love, laughter, and full bellies. Many of the family has taken their “turn” living in Penny’s house when they needed it. There was not a thing she wouldn’t do for anyone in need. In lieu of flowers, please consider donation to the memorial fund. A Celebration of Life service will be held at the Polo Faith Discovery Church, Saturday, January 22, 2022 at 11:00 a.m. with a luncheon to follow. Condolences may be sent to [email protected]

The family of Penny Sue Mon created this Life Tributes page to make it easy to share your memories.

Send flowers to the Mon family.