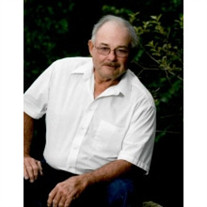 Ralph Floyd Coffman, 78, of German Valley, IL, died on December 3, 2019 while doing what he loved best, farming. Ralph was born on June 16, 1941, in Freeport, IL, to Floyd and Lorraine (Link) Coffman. The oldest of three sons, Ralph had a keen aptitude for farming, studied agriculture at Iowa State University, and became the sixth-generation head of the Coffman family farm. He spent much of his time, until the day he passed, where he was the happiest (or most frustrated)-in the corn and soybean fields, and earlier on also tending to beef cattle. Ralph was a strong Christian and active member and board member of North Grove Evangelical Church. Committed to serving God, for more than 30 years he was part of a weekly jail ministry, alongside his wife, as a member of the Gideons International Auxiliary. On mission trips to Papua New Guinea, Honduras, and Venezuela, he took his faith and ministry overseas. Ralph had a strong sense of civic duty, serving several terms on the school board for the Forrestville Valley School District, and participating in the Fellowship of Christian Farmers and Illinois Farm Bureau. He kept close tabs on local matters, and could be found most early mornings eating breakfast in town, discussing farming, the weather, politics, sports, and everything else with other members of the fabled "Table of Knowledge." Preceded in death by his beloved wife of 57 years, Shirley, he is survived by his son, Tim (Vicky) Coffman of German Valley; three daughters, Lori Coffman of Walworth, WI, Lisa (Robert) Hosack of Beaver, PA, and Julia (Jim Spellman) Coffman of Bethesda, MD; five grandchildren, Andrea (Nick) Schneiderman, Jacob (Sally) Coffman, and Alexandra (Joe Carroll), Emma, and Margaret Hosack; three great-grandchildren, Jaiden, Breelyn, and Brycen Schneiderman; two brothers, Lyle (Joann) Coffman of Kankakee, IL and Lee (Nina) Coffman of Plainville, IN; and many much-loved nieces and nephews. He also leaves behind his valued late-in-life companion, Maralee Kaufman. Visitation will be from 2 to 6 p.m. Sunday, December 8, 2019, at Burke-Tubbs Funeral Home in Forreston. Funeral services will be at 10 a.m. Monday, December 9, 2019, at North Grove Evangelical Church, with Pastor Mark Phillips and former Pastor Tim Hotchkiss officiating. Family burial will be in Coffman Cemetery. Contributions, in lieu of flowers, may be made to Gideons International at www.gideons.org. Please sign Ralph's guestbook and share a memory at www.burketubbs.com

Ralph Floyd Coffman, 78, of German Valley, IL, died on December 3, 2019 while doing what he loved best, farming. Ralph was born on June 16, 1941, in Freeport, IL, to Floyd and Lorraine (Link) Coffman. The oldest of three sons, Ralph had a... View Obituary & Service Information

The family of Ralph F. Coffman created this Life Tributes page to make it easy to share your memories.

Send flowers to the Coffman family.