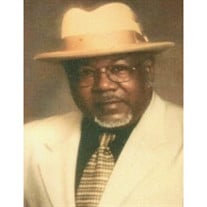 Cleaven James Jamison, Sr. was born December 17, 1930 in Ripley, TN to John and Bertha Jamison. Cleaven was a Korean war veteran and served from 1951-1953. He earned several decorations including 3 Korean Service Defense Medals, the Purple Heart, and the Medal of Efficiency, Honor and Fidelity. After his military tour, Cleaven returned to Ripley and continued his career in agriculture. He married Flora Jean Brown, in 1955. From this union, they had three children, Gale Katrina, Vellita Denise and Cleaven, Jr. On March 25, 1961, Cleaven married Sylvia Brown of Philadelphia, MS. In 1967, Cleaven moved his wife and three children to Freeport IL. In 1970, they added a new addition to the family, their daughter, Babette. In Freeport, Cleaven retired from Kelly Springfield Tire Co. after 28 years. He was a devout Christian, receiving and received his license to minster the gospel in March of 1986. He served as an Associate Pastor at Philippians Missionary Baptist Church. Reverend Jamison transitioned from this life to God's glorious light on Sunday, August 25, 2019. Reverend Jamison is survived by his four children Gale Jamison of Edina, MN; Vellita Dickens, Cleaven James Jamison, Jr. and Babette Jamison Varner (Robert), all of Freeport, IL. He also leaves to cherish his precious memories, seven (7) grandchildren; twenty (20) great grandchildren; three surviving siblings Willie Mae Nelson, Lillie B. Jamison both of Lansing, Michigan; Elmore Jamison of Ripley, TN and a host of nieces, nephews and friends who loved and treasured him. Reverend Jamison was proceeded in death by his parents; his loving wife of 55 years, Sylvia; and 4 siblings: Jessie Mae Braden, Joe Rufus Jamison, John Jamison, and Napoleon Jamison. Funeral services will be 11:00 a.m. Saturday August 31, 2019 at Philippians Missionary Baptist Church. Rev. Nathan Allison and Robert Varner, Jr. will officiate. Visitation is 9:00 a.m. until the time of service at the church. Burial will be in Chapel Hill Memorial Gardens. A memorial has been established in his memory. Please sign Rev. Jamison's guestbook and share a memory at www.burketubbs.com

The family of Rev. Cleaven James Jamison Sr. created this Life Tributes page to make it easy to share your memories.