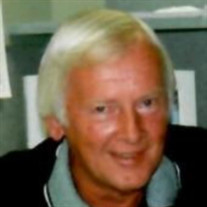 Richard J. “Dick” Connors, age 84, of Freeport, IL, passed away at his home in the early morning hours of Saturday, July 3, 2021, with his wife, Judy, by his side. Dick was born May 21, 1937, the eldest of six children born to the late John J. and Margaret M. (Wiemers) Connors. He graduated from Aquin, class of 1955, and began his 45-year career with Micro Switch (Honeywell) shortly thereafter. Dick and Judy were introduced to each other by mutual friends in 1987 and recently celebrated their 32nd wedding anniversary. Dick was a wonderful writer and often marked the milestones of their marriage with a beautiful poem or funny limerick. He took great pleasure in watching the birds and other wildlife in his backyard until he lost his sight following his third bout of ocular basal cell carcinoma. Dick stayed active well into his late 70s by walking, shoveling his (and sometimes his neighbors’) driveway, and, of course, golfing. He played more than 100 different courses during his lifetime, and scored two holes-in-one. Survivors include his wife, Judy; daughters Terri (Tom) DeDecker of Kansas City, MO, and Sandra (Jay Knight) Detert of Rockford, IL; stepson Michael (Debbie) Nagel, Jr., of Las Vegas, NV; stepdaughter Chris (Lee) Black, of Forreston, IL; granddaughters Margaret DeDecker, Laura DeDecker, and Sarah DeDecker; grandsons Michael Estes and Aaron Detert; step-granddaughters Stacey, Andrea, Nichole, and Karmen; eight step-great-grandchildren; brother John (Joyce) Connors; sisters Roberta (Ron) Schradermeier and Mary Connors; sister-in-law Sandy Connors; and several nieces, nephews, and cousins. Dick was preceded in death by his parents and brothers Ronald Connors and Robert Connors. The family would like to thank Dick and Judy’s neighbors, friends, the staff at FHN, FHN Hospice, and Father Brian Prall and the faith community at Grace Episcopal Church. In ways too numerous to mention, they provided assistance, support, care, and compassion to both of them during Dick’s illness. If you would like to honor Dick’s memory, please consider a donation to FHN Hospice in his name. A private service will be held at a later date.

The family of Richard J. "Dick" Connors created this Life Tributes page to make it easy to share your memories.

Send flowers to the Connors family.