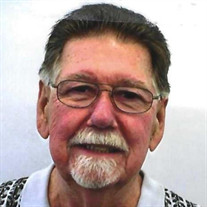 Robert “Bob” Clarence Hendrickson, 80, of Freeport, IL passed away Tuesday January 25, 2022 in his home surrounded by family. He was born March 26, 1941 in Monroe, WI to Clarence Hendrickson and Hazel Horner. He married Patricia G. Schild July 2, 1961 at Argyle United Methodist Church in Argyle, WI. Patricia passed away December 24, 2008. On March 8, 2010 he married Margaret “Peg” Maple-McElroy in Ocala, FL. After graduating from Blanchardville High School Bob enjoyed farming with his parents and brother David. He subsequently graduated from The University of Wisconsin-Madison and was a teacher in Dakota as well as an English teacher at Freeport High School, Highland Community College and Argyle Wisconsin Public Schools upon retiring in 2006. Bob was a gifted writer, authoring two books, Snapshots in Time and Going With God. Bob loved wintering in Florida with Peg and was influential in their snowbird community leading writing groups and participating in painting classes. Bob was also an avid gardener with gardens chosen for Freeport’s Garden Club walk, loved golfing with many close friends and family, and was unwavering in his quest to discover and share the family ancestry and heritage with future generations. He was a member of Faith United Methodist Church where he served on the parish committee. Robert was also a member of the National Education Association, Shakespeare Society, Mount Horeb Sons of Norway, and volunteered at Music on Chicago. An exceptionally loving, gentle, and open-armed husband, father, grandfather, and great-grandfather, he is survived by his wife Margaret “Peg” of Freeport, IL; three sons Robert “Rob” C. (Jane) Hendrickson Jr., Barrie A. (Terri) Hendrickson, and Christopher J. (Mackenzie Krause) Hendrickson all of Freeport, IL; two daughters Amy B. (Wayne Kaiser) of Winslow, IL and Jennifer L.(Lisa Howard) Hendrickson of Evergreen, CO; three step-daughters Leslie (Jeff) Mastioanni of Souix Falls, SD, Amy (John) Krukowski of Elmhurst, IL and Emily McElroy of Omaha, NE; thirty blended grandchrildren; Julie (Aaron), Robert III (Christina), Ashley, Andrew (Rachel), Tyler (Abigale), Brianna(Joseph), Mariah, James, Danica, Gavin, Tayler, Tasha (Matt), Jace, Jordan, Taryn, Jett, Luke (Kim), Zachary (Billie), Joe, Nora, and Simon; fourteen blended great-grandchild, AJ, Lane, Alexis, Grace, Evelyn, Addilyn, Taya, Shane, Jadie, Grace, Elise, Lauren, Isla, and Finley. Preceding Robert in death are his parents, first wife Pat, father and mother-in-law’s, brother David, step-son Robert John, and grandson Johnathon. A visitation will be held from 5:00-7:00 P.M. on Friday January 28, 2022 at Burke-Tubbs Funeral Home. Funeral services will be 11:00 A.M. Saturday January 29, 2022 at Faith United Methodist Church with Rev. Larry Thomson officiating. A private burial will be in Chapel Hill Memorial Gardens at a later date. Memorials have been established for Bob at Faith United Methodist Church, Salvation Army and Blanchardville Wisconsin Historical Society in his loving memory. To send flowers or a memorial gift to the family of Robert "Bob" C. Hendrickson please visit our Sympathy Store. Bob will be greatly miss by all that knew him and his never ending love of life, family, and friends along with his generosity will be carried on by all. He lived the saying “Do All the good you can, by all the means you can, in all the ways you can, in all the places you can, at all the times you can, to all the people you can, as long as ever you can.”

The family of Robert "Bob" C. Hendrickson created this Life Tributes page to make it easy to share your memories.

Send flowers to the Hendrickson family.