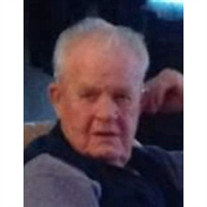 Robert Mitchell, 92, of Freeport, passed away, Wednesday February 3, 2021 at Amberwood Care Centre, Rockford. Robert was born December 17, 1928 in Eldorado, Illinois, the son of Edwin B. and Katie (Endicott) Mitchell. Robert married Susan "Susie" Reimers November 27, 1958. Susie passed away June 3, 2007. Robert served in the Korean Conflict from 1950-1953. He enjoyed being in the outdoors, fishing, and golfing. He was a Chicago Bear and Chicago Cubs fan. Family was always most important to him. Surviving is his daughter, Donna Dagnan of Freeport; stepson, Jack (Shirley) Anderson of Johnsburg, Illinois; two brothers, Jack Mitchell of Kentucky, and Jim Mitchell of Florida; three grandchildren, Sandy Corrigan of Baileyville, Wendy Corrigan and Austin Corrigan both of Freeport. Also surviving is many great grandchildren and great-great grandchildren. Robert was preceded in death by parents, wife, son, Bobby; three sisters, Susan, Betty, and Dorothy; and brother, Joe. Cremations rites have been accorded. At this time, no visitation or services are planned. A memorial has been established in Robert's memory. Please sign his guestbook and share a remembrance at www.burketubbs.com

The family of Robert Mitchell created this Life Tributes page to make it easy to share your memories.

Send flowers to the Mitchell family.