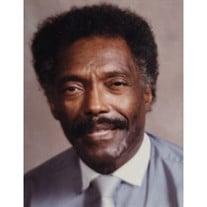 Roosevelt Banks departed this earthly life and began eternal life on Friday, October 30, 2020 at 9:55pm at Freeport Memorial Hospital. Roosevelt was born April 18, 1925 in Holmes County, Mississippi to Roosevelt and Ola (Love) Banks. Roosevelt was the oldest of three siblings: Nozelia and Elicie. The family came to Freeport when Roosevelt was three years old to join other family members who were already established in the area. Roosevelt graduated from Freeport High School in 1944 and Illinois State University in 1950. He was inducted into the ISU Football Hall of Fame in 1974. He had many accomplishments and would be the recipient of many honors, awards and recognition over the years. Some of those include being a Staff Sargent in World War II at the age of 18, serving in the Pacific, receiving the Pat Holmes Award, being the first black teacher in Freeport, Illinois, and having an alternative school named after him. He served as the President of the Board of Directors of the MLK Recreation Center, and other boards in the Freeport community. Roosevelt's passion for education lead him to Taylor Park Elementary School where he taught from 1958 until 1972. He later became the Dean of Students at Freeport Senior High School, retiring in 1990. Roosevelt's presence in the field of education was exemplary. He was a monumental presence for not only young black children, but the community as a whole. Although Roosevelt was known to be quiet, calm and cool, his presence alone spoke volumes. He could stand with arms folded, nod his head, and everyone in the room understood his message. Roosevelt was a true family man and made it his job to visit all of his relatives, sitting and talking for hours. Roosevelt married Doris Lenoir in 1955 and they welcomed two children: Sandra Kay and Roosevelt, Jr. In 1967 Roosevelt married Catherine Taylor and welcomed their daughter Bethanne the next year. Roosevelt was formerly a member of First Church of God but had recently rejoined St. Paul Missionary Baptist Church. Roosevelt was proceeded in death by his parents Roosevelt and Ola Banks, sisters Nozelia Ross and Elicie (William) Sandifer, daughter Sandra Kay Banks, nephews Roger Banks and Roger C. Farrar. Roosevelt was a humble and gracious man who touched the lives of many. In addition to his wife Catherine he is survived by son Roosevelt "Crocket" Banks, Jr., daughter Bethanne Banks Holifield; granddaughters Ashley Banks and Jasmine Holifield; great-granddaughter Aliyah Yokely; special nieces and nephew whom he helped raise Carol (Victory) Bell, Constance (Clint) Walker and William Banks, Jr., Goddaughter Holly Jones, special cousin Elizabeth (Edward) Furdge, a host of loving family and dear friends. Roosevelt will be dearly missed, but his legacy will live on.

The family of Roosevelt Banks created this Life Tributes page to make it easy to share your memories.