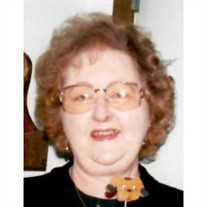 Ruth Ann Ludwig, age 81, passed to her heavenly home on Sept. 8th at Swedish American Hospital in Rockford peacefully surrounded by her family. She was born August 16, 1939 at Deaconess Hospital in Freeport, IL to Clarence S. and Elizabeth C. (Buntjer) DeWall. She was a 1957 graduate of Forreston High School. On June 24, 1960 she married her high school sweetheart and soul mate Lorence E. Ludwig at Prairie Dell Presbyterian Church, where she was baptized on March 17, 1940 and remained a lifelong member. Ruth Ann and Lorence began their married life farming north of Baileyville and then on the DeWall/Ludwig family farm (listed as a centennial farm in 2004) before building a home near Harper, where they have resided since March 1, 1978. Ruth Ann was a homemaker and ultimate farm wife working alongside Lorence to ensure the family farm was successful. She milked cows, fed pigs, drove tractors, gardened, canned, cooked, and baked. Ruth Ann served at Prairie Dell Church as an Elder, Trustee and also church Secretary and Reporter. She was also a Tri-F member. She enjoyed playing the piano for Sunday school and the church organ for over 50 years, discontinuing due to deteriorating eyesight. She sang vocal solos for many funerals in her church, as well as doing special music. She loved to sew, patching many pairs of jeans and socks for her husband, sons, and grandsons, along with making curtains and casserole carriers. She also was a wonderful cook, always baking something special and making delicious soup. She was a past member and secretary of the Horseshoe Riding Club of Leaf River and was a Stephenson County Farm Bureau member all her married life. Upon graduating from high school, Ruth Ann was employed at Freeport Insurance Company for 4 years, then stayed home and worked on the farm while raising two sons. Later she was employed at Freeport Memorial Hospital as a medical transcriptionist for 17 years. Then she worked at Economy Fire & Casualty/St. Paul Insurance/MetLife Home & Auto Insurance Co. retiring in January of 2002. She loved visiting her children and their families. She was often found attending her grandchildren's school events, church activities and musical performances. In addition, she loved watching her grandsons play football. One highlight was Daniel being on the team that became State Champions in 2014. She also truly enjoyed all of Sara's softball games and watching Marissa cheerleading for her school. She will be remembered for her great cooking and love towards everyone, but mostly remembered for her devotion to her family. She will be deeply missed. She is survived by her loving husband Lorence of 60 years, two sons, eight grandchildren, and three great grandchildren. Eldest son Steven L. Ludwig with his wife Vicki; children Matthew, Christopher, Andrew (Mckayla), Aaron, Nathaniel, and Marissa; and great-grandsons Cayden, Bentley, and Riley and youngest son Randall L. Ludwig with his wife Laura and children Sara (Josh Clark) and Daniel (Alleigh). She was preceded in death by her parents and grandparents. Visitation will be held from 5:00-8:00 P.M. on Friday September 11, 2020 at Burke-Tubbs Funeral Home in Forreston. Private family services will be held at 10:00 A.M. on Saturday September 12, 2020 at Prairie Dell Presbyterian Church, 16032 W. Coffman Road Shannon IL. Rev. Diane Jochum officiating. Burial will be in the church cemetery following the service. Family was helped with arrangements by Burke-Tubbs Funeral Home. A memorial has been established in her name.

Ruth Ann Ludwig, age 81, passed to her heavenly home on Sept. 8th at Swedish American Hospital in Rockford peacefully surrounded by her family. She was born August 16, 1939 at Deaconess Hospital in Freeport, IL to Clarence S. and Elizabeth C.... View Obituary & Service Information

The family of Ruth Ann Ludwig created this Life Tributes page to make it easy to share your memories.