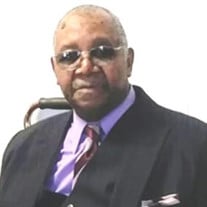 Sammie Lee Hughes 86, affectionately known as “Bud” of Freeport, Illinois, was called to his heavenly home on Tuesday, July 27, 2021, at home surrounded by his Family. Sammie was born on December 27, 1934, in Mesa, Mississippi. He was the son of the late Marshall and Ruby (Crump) Hughes. Sammie was the youngest of three children. After the untimely passing of his mother when he was a year old, he was blessed with a bonus mother. Sammie’s grandmother’s sister, Louisiana (White) Brown, known as Aunt Book, was bestowed the title mother. Sammie was employed at at Structo, JI Case, and Burgess Cellulose before going to Kelly Springfield where he retired after many years of service. Sammie confessed Christ as his personal Savior and was a member of Mt. Carmel Missionary Baptist Church, under the leadership of Pastor Tommie L. Robinson, and later under the leadership of Pastor Charles Threadgill, Jr. He served faithfully on the Laymen's Board and Usher Board. Sammie enjoyed camping, fishing, hunting, bowling, traveling and working in his garden. He was an avid sports’ fan. He loved watching baseball, and his favorite team was the Chicago Cubs. Most of all, he loved spending time with his family. Sammie was not only a phenomenal husband and father, but he was an awesome "UNCLE"! He meant so much to his nieces and nephews because he went above and beyond being an uncle to all of them. Sammie/Uncle Bud was a comforter, step up dad, counselor, provider, confidant, prayer warrior, care giver and protector. He always showed unconditional love. Uncle Bud was the prime example of what an uncle was/should be. He leaves to celebrate his homegoing and cherish his many memories, three sons; James (Sedalia) Hughes, Jeffrey (Carolyn) Hughes, Marshall (Pamela) Hughes, all of Freeport, IL; two daughters: Brenda (Allen) Gray of Kankakee, IL and Jeanine Hughes of Freeport, IL.; one sister: VeElla Hughes of St. Louis, MO; eleven grandchildren: Jamero Hughes, Lendell McClain, Marcy Jones, Kristina Hughes, Christopher Hughes, Chase Euell, Trianna Hughes, Marshall Hughes, Jr., Milan Hughes, Chanlon Hughes, Jarren Hughes, Jaylon Hughes; fourteen great-grandchildren and three great-great grandchildren, one sister in-law: Alee Veasley of Virginia Beach, VA., and a host of nieces, nephews and friends. Sammie was preceded in death by his wife, Clydie Hughes; parents Marshall and Ruby (Crump) Hughes, bonus mother Louisiana (White) Brown; brother: W.C. Williams, brother in-laws: Willie James Veasely, John Allen Veasley, Eddie Veasley, and sister in-laws: Clesta Williams, Sarah Veasley and Ruth Veasley. Funeral services will be 11:00 A.M. Saturday August 7, 2021 at Mt. Carmel Missionary Baptist Church with Rev. Charles Threadgill officiating.; LIMITED SEATING WILL BE AVAILABLE FOR THE SERVICE. (**ONLY FAMILY & CHURCH MEMBERS OF MT. CARMEL BAPTIST WILL BE ALLOW TO BE IN ATTENDANCE**) Visitation will be from 9:00 A.M. until the time of service at the church. **VISITATION IS OPEN TO ALL** Burial will be in Oakland Cemetery. THERE WILL BE NO REPASS. THE FAMILY APPRECIATES YOUR UNDERSTANDING.

The family of Sammie Lee Hughes created this Life Tributes page to make it easy to share your memories.

Send flowers to the Hughes family.