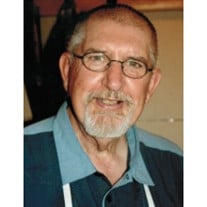 Scott Winfield Buck, 73, of Davis, died Tuesday August 13, 2019 at Medina Nursing Center, Durand. Scott was born in Savanna, IL to Harold and Muriel (Nicol) Buck on October 26, 1945. When Scott was 12, his family moved to the Freeport area where he attended Immanuel Lutheran School. He graduated from Pearl City High School in 1964 and went on to earn his Associates Degree in Agriculture Management from Joliet Junior College. He married his high school sweetheart, Jane Mack, on March 26, 1966. In September of that same year, he was drafted into the US Army and served in Vietnam from 1967-68 where he was the Captain's radio operator. He called in helicopters when his platoon needed assistance during fire fights and when they needed to evacuate the injured. Upon his return, he managed the Coop in Milledgeville, IL. While living there, his first son Joe was born. In 1970, Scott purchased the Kent Feed dealership in Davis, IL which he owned and operated as Buck's Mill for the next 22 years. Scott's second son, Dan, was born in 1973. Scott served on the Davis town board for several terms, the SACC board in Freeport and served on the Dakota School board for eight years including four years as the board president. He served as Cub Scout Master, Davis Town & Country volunteer, Davis Volunteer Fire Department, and many other volunteer positions. Scott was a member of St. John Lutheran Church in Pecatonica, Freeport VFW, Durand American Legion, and F. O. Eagles in Freeport. Scott always made sure the widow ladies in Davis got their snow plowed in the winter and a fresh supply of morel mushrooms in the spring. He was an avid Wisconsin Badger fan and held season basketball tickets for nearly 50 years. He loved to go 4-wheeling locally and in Colorado. His love of travel took him to all 50 states, Canada, Mexico, the Caribbean and four times to Europe. He was a very generous donor to charity and was known to buy lunch for both friends and strangers. He is loved by his family and his many friends. Scott is survived by his wife of 53 years, Jane, two sons, Joe and Dan (Jennifer), two granddaughters, Rachel and Ashley, two grandsons, Trevor and Adam, his mother Muriel of Savanna, IL, three brothers Lowell (Diane) of Pearl City, IL, Harold (Barb) of Brandon, SD and Tim (Linda) of Peoria, IL, his sisters-In-Law Sharon Hummermeier and Mary Lou (Steve) Kaney, Brother-in-law Kelly (Laura) Mack all of Pearl City, IL and many nieces and nephews. He was preceded in death by his father Harold Buck, mother-in-law and father-in-law Robert and Berniece Mack, brother-in-law Bill Hummermeier, and nephew Tim Kaney. Funeral services will be 2:00 p.m. Sunday August 18, 2019 at St. John Lutheran Church, Pecatonica. Rev. Terry Theiss will officiate Visitation will be 2:00 p.m. - 5:00 p.m. Saturday August 17, 2019 at Burke Tubbs Funeral Home, Freeport. Burial will be in Davis Cemetery. A memorial has been established in his memory. Please sign Scott's online guestbook and share a remembrance at www.burketubbs.com

Scott Winfield Buck, 73, of Davis, died Tuesday August 13, 2019 at Medina Nursing Center, Durand. Scott was born in Savanna, IL to Harold and Muriel (Nicol) Buck on October 26, 1945. When Scott was 12, his family moved to the Freeport area where... View Obituary & Service Information

The family of Scott Winfield Buck created this Life Tributes page to make it easy to share your memories.

Send flowers to the Buck family.