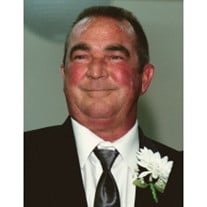 Scott Jenkins June 13, 1957 - September 7, 2019 Scott Anthony Jenkins, 62, was born to Larry and Neta (Hille) Jenkins in Freeport, IL. He passed away in the company of his loving family at Agrace Hospice Care Center in Madison, WI, following an extended hospitalization. As a Christian, his family anticipates the day they meet again in God's presence. At an early age, Scott was curious about how things worked. He was great with his hands and loved to fix and improve whatever he could. Scott worked as a mechanic at Sport Motors in Freeport, which was owned by his parents. The mechanical skills he developed served him well his whole life. He was also a member of Team Sport, the business' motorcycle racing team that kept his hands greasy and his leathers scuffed. He loved racing on anything with wheels. After Sport Motors, Scott worked as a boat mechanic with his god father, Jimmy Peters, at Peter's FCE Marine. At this point, he met and married his wife, Brenda (Smith) on January 24, 1987 and later had two sons: Luke Lawrence and Michael Scott. After some time, he served in the City of Freeport Street Department. Scott was also part of the Freeport City Council, carrying with him his hands-on experience as an employee and resident of the city. He briefly worked as the Superintendent of Freeport City Cemetery before beginning a career with Saber Management L.L.C., where he managed twenty-two cemeteries and funeral homes throughout several states. His successful career with Saber took Scott and his family to Paducah, KY for the next ten years. They eventually returned to Freeport in 2016 to purchase Oakland Cemetery and Mausoleum, which Brenda continues to own and manage today. Scott was a family man and an extremely hard worker; he adored his wife and two boys. He raised his kids to love God, love others, and work hard at a very young age. His oldest, Luke, completed a PhD and works as an Electrical Engineer for IBM in Poughkeepsie, NY. Michael is a career Fireman and Carpenter in Paducah, KY. Scott was delighted in and proud of his two sons, their wives, and his four grandchildren. As a husband, Scott's greatest joy was being married to Brenda, who is the spiritual glue of the family and the love of Scott's life. Family who live to cherish his memory include his wife, Brenda (Smith) Jenkins; his son, Luke (Molly) Jenkins, and their children, Landon and Cadence; his son Michael (Katie) Jenkins, and their children, Canaan and Charlee; his sister, Jodie (Ken) Bollman (Cadillac, MI), and their son, Chad (Gaby) Bollman (Salt Lake City, Utah); and his sister and her son, De Jenkins and Carson Lambing (Los Angeles, CA). Scott was preceded in death by his parents and by his grandparents, Harold and Jeanette Hille and Ed and Martha Jenkins; by his cousin, Michael Jenkins; and by his nephew, Eddie Bollman. A visitation will be at Burke-Tubbs Funeral home on Friday, September 13, 2019 from 9:00-11:00am. The memorial service will be at Burke-Tubbs at 11:00am, and a funeral service to follow at Oakland Cemetery and Mausoleum.

The family of Scott A. Jenkins created this Life Tributes page to make it easy to share your memories.

Send flowers to the Jenkins family.