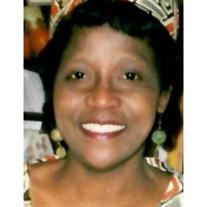 The life and legacy of Shirley Faye (McGee) Green Farrar, known affectionately as Faye by her family, began in Quitman, Mississippi, January 19, 1937. She was the second child of twelve born to Leroy and Rosie Belle McGee. She departed this life on Wednesday, March 11, 2020.Before moving to Freeport, Shirley became a loving mother to LaMorris Earl. In order to make a better life for him, she moved to Freeport, where she met and married the late Robert Green. To this union four children were born: Rosalyn, Carl, Donna and Mike. Shirley learned at an early age the importance of caring for others when she was given the responsibility of taking care her younger sister, Carolyn; while her brother Marvin was responsible for Carolyn's twin brother, Carroll. She received her education at Black Jack Elementary School and Shirley Owens High School in Quitman, MS. Although Shirley was small in stature, she was a hard worker. She would take on any task and complete it with perfection. She was employed at Micro Switch and retired from Newell Rubbermaid. Shirley was reared in a God-fearing home. She was taught to love God with all her heart, mind, and soul. She confessed her belief in Christ, was baptized, and became an active member of Elwood Church of God until she moved to Freeport. When she relocated to Freeport, she continued to serve the Lord by becoming an active member of First Church of God. After Robert's death, Shirley continued to live a virtuous life. She BROUGHT her children to church. She continued to teach them the love of Jesus even when they were not at church. Because of her dedication to the Lord, she caught the eye of Herman Farrar. The Lord blessed her a second time to experience the love of a dedicated husband, and she and Herman became one. With this union, she was blessed with four additional children: Phillip, Floyd, Tanya, and Mike. Shirley loved people. She was respected by all who knew her. She served as a role model in her community and in her work place. She lived Matthew 22:37-39: "Love the Lord your God with all your soul and with all your mind. This is the first and greatest commandment. And the second is like unto it: 'Love your neighbor as yourself.'" Shirley was the love of so many. She had a smile that lit up the room when she walked in. She lived life to the fullest and wasn't afraid of taking risks. Her spirit and her love of "good" singing will live forever by those who love her. Shirley leaves to cherish her loving memory eight children: LaMorris (Joyce) McGee, Rosalyn, Carl (Carla), Donna, and Michael Green, all of Freeport; five brothers: Carroll, Willie (Gwendolyn) and Gregory (Carolyn) McGee, all of Quitman, MS; Gary (Shelinda) and Leroy McGee, of Guaiter, MS; four sisters: Mable McGee (Linval Wilson) of Freeport; Sharron Dear and Carolyn Lenoir of Quitman, MS, and Rosie McGee-Brown of Clarksdale, MS; six grandsons, four granddaughters and a plethora of great grandchildren, nieces, nephews, cousins, and friends. Shirley was preceded in death by both Robert and Herman, one grandchild, Carl Green; her parents, grandparents, her brothers: Marvin and Roger and other family members that she loved dearly. Due to local, state, and national concerns over the spread of coronavirus, there will be no visitaiton and the funeral is not open to the public. Please sign Mr. Farrar's guestbook and share a memory at www.burketubbs.com

The life and legacy of Shirley Faye (McGee) Green Farrar, known affectionately as Faye by her family, began in Quitman, Mississippi, January 19, 1937. She was the second child of twelve born to Leroy and Rosie Belle McGee. She departed this... View Obituary & Service Information

The family of Shirley Farrar created this Life Tributes page to make it easy to share your memories.

Send flowers to the Farrar family.