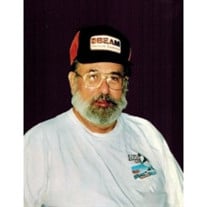 Dr. J has given his last lecture and read his last article. Steven Richard Jennings passed away at the home of his oldest son and daughter-in-law peacefully surrounded by family on March 4, 2021 from a long fought battle of cancer. He was born May 5, 1943 in Freeport, IL to parents Dean and Norma (Kochsmeier) Jennings. He is survived by Barbara Halstrom of Rockford, IL, his loving, longtime partner of 26 years; two brothers Robert (Nancy) of Freeport, IL and Keith (Lura) of Delafield, WI; three sons (with former wife Sharon Moss) Matthew (DeAnn) of Pecatonica, IL, Timothy (Stacey) of Centennial, CO, and Peter (Jill) of Mead, CO. Also surviving are his grandchildren Tyler (Cassie) of Stillman Valley, IL, Colin of Pecatonica, IL, Hayden of Mead,CO, twins Katie and Emmie of Centennial, CO; great grandchildren twins Ava and Joanna of Stillman Valley, IL; and along with numerous other family members and friends. Steven is preceded in death by his parents, maternal grandparents Fred and Martha (Dittman) Kochsmeier and paternal grandparents Cord and Maude (McNamara) Jennings. He was proud of his 42 years as a faculty member at Highland Community College and would like to thank the entire faculty and support staff that made those many years a pleasant journey. Steven graduated from Freeport High School in 1961. He went on to earn a Bachelor's Degree from Western IL University in 1966. He then went on to earn a Doctorate Degree from Northern Illinois University in Management and Labor Relations in 1976. Afterwards, he went directly into teaching at the college level. He was president of the faculty senate for 25 years and president of Northwest Illinois Central Labor Council for 45 years. He recently served 5 years on the Apple Canyon Lake Legal Commission, where he very proudly owned his log cabin. He was a lifetime member of the Society of Paper Money Collectors (SPMC) where he served 6 years on the board of SPMC. He was a 60 year lifetime member of the American Numismatic Association (AMA). In 1964, Steven opened Jennings Coin and Stamp in Freeport buying/selling rare coins and stamps, which was a passion of his. He worked tirelessly going to postcard and paper money shows accumulating a large collection of US bank postcards along with the paper money notes that coincided with them. In the 1980s, sports cards became popular, which he incorporated into the business. His son, Matthew, joined him in the business. Then, in 1992, they opened a second location in Rockford, known currently as Rockford Coin and Stamp. Upon retirement from Highland College, he returned to concentrating on the stamp side of the business. This allowed him to continue the joy of lecturing to customers, instead of students, about the history of stamps and coins. He was always glad to hear from former students about their successes and catch up on current events. His lectures will be dearly missed. Thank you to Northern Illinois Hospice, Mayo Clinic (Dr. Kourelis), and OSF Cancer Center (Dr. Kahn) and Andrew, who greeted Steven at every appointment and who helped check him in. The compassion and care that each organization provided was exceptional. A special thank you goes to caregivers DeAnn Jennings, Valerie Heim, and Dawn Metzger. Cremation rites are in order. A visitation will be held to honor Steven's life on Friday, March 12 from 4-7 at Burke-Tubbs Funeral Home in Freeport, IL. (Masking and social distancing will be required.) The funeral service will be held Saturday, March 13 at 1:00 with Pastor Roger Bronkema officiating at Burke-Tubbs Funeral Home. There will be a visitation an hour before the service. In lieu of flowers, please consider contributing to Highland Community College Scholarship Fund, Mayo Clinic, or Northern Illinois Hospice.

Dr. J has given his last lecture and read his last article. Steven Richard Jennings passed away at the home of his oldest son and daughter-in-law peacefully surrounded by family on March 4, 2021 from a long fought battle of cancer. He was born... View Obituary & Service Information

The family of Steven Richard Jennings created this Life Tributes page to make it easy to share your memories.

Dr. J has given his last lecture and read his last article. Steven...

Send flowers to the Jennings family.