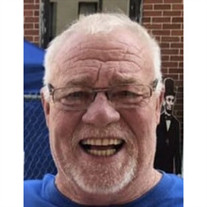 Steven C. Sorn, 65, passed away, peacefully at his home on November 1, 2018. He was born on September 29, 1953 in Freeport, the son of Jack Newmiller and Sandra (Cole) Newmiller. Sandra later married Robert Sorn who adopted Steve and raised him as his son. Growing up, Steve lived in Lanark, Freeport, Muscatine, IA, and Ottawa, IL, graduating from Ottawa Township High School in 1971. He married Denise Provance in 1973 with whom he had a daughter Tonya. In 1981 he married Connie Ross, and lived in Crestwood, IL with their daughter Stephanie. They later returned to Freeport which is where Steve spent the remainder of his years. He worked most of his professional career on the railroad and he was a railroader through and through. He started on the Rock Island Railroad and later worked for the Chicago RTA, the Grand Trunk, and the Canadian National Railroad from which he retired in 2013. He loved being retired and no longer having to travel for work. Retirement allowed him more time to spend at his second home, Dan's Route 66, and with his best friend, Dan Rieger. Although Cocoa Beach, Florida was his favorite vacation spot, he also loved his visits to his daughters in Phoenix, AZ and Austin, TX. Steve was known for his sense of humor, and especially loved dirty jokes which he happily told. He loved playing golf and watching the Chicago White Sox, the Bears, and NASCAR. Many happy times were spent at the old Comiskey Park when he and Connie were first married, and where they took newborn Stephanie to opening day. He worked hard, played hard, and relaxed hard. Despite challenges in his life, he was happy with himself, his family, and his life. He is survived by his wife Connie, daughters Tonya and Stephanie, mother Sandra, sisters Paula and Karen, aunt, Joanne Lichty, uncles, Kenneth (Kay) Sorn and Jerry Sorn, brother- and sister-in-law Scott and Gayle Ross, sister-in-law Cheryl Ross, and many nieces and nephews including Dakota Lawson of Freeport. He was preceded in death by his biological and adopted fathers, grandparents Paul and Mildred Cole and Ruth and Clarence Sorn, sister Susan Sorn, father- and mother-in-law Stan and Peggy Ross, and brother-in-law Kent Ross. A visitation will be held on Wednesday November 7, 2018 at Burke Tubbs Funeral Home from 4:00 - 7:00 pm, followed by a brief memorial service at which brother-in-law Pastor Scott Ross will officiate. In lieu of flowers, a memorial will be established. Please sign Steve's guestbook and share a memory at www.burketubbs.com.

Steven C. Sorn, 65, passed away, peacefully at his home on November 1, 2018. He was born on September 29, 1953 in Freeport, the son of Jack Newmiller and Sandra (Cole) Newmiller. Sandra later married Robert Sorn who adopted Steve and raised... View Obituary & Service Information

The family of Steven Craig Sorn created this Life Tributes page to make it easy to share your memories.

Steven C. Sorn, 65, passed away, peacefully at his home on November...

Send flowers to the Sorn family.