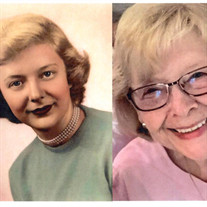 Sybil Lenore Scovill 1934—2021 Sybil Scovill passed away peacefully in her home, surrounded by her loving family, on October 23, 2021. She was born in Freeport IL on July 31, 1934 to Esther and Roy Mensenkamp, the youngest of four daughters. Sybil built a rich, wonderful, long life in Freeport. Her parents raised Sybil to have a strong faith, a faith that sustained her throughout her life. She instilled that faith in her children and grandchildren. Sybil was baptized, confirmed and married at St. John’s, and raised her children in the church. It was a grounding place of faith, family and friendship throughout her life. In her younger years, Sybil attended Union School, successfully battled polio, learned how to be a handyman from her dad and a wonderful homemaker from her mother, and graduated from Freeport Senior High in1952. After graduation, she worked at Crum and Forester, married Randall Keith in 1953, and in 1955 began having her children. She worked at Cornbelt for a number of years as she juggled raising her family, proving herself to be strong and resourceful woman. Later in life, she would have successful jobs at Micro Switch and Highland Community College. She was a hard worker and instilled that ethic in her children. In 1966, she married her much loved husband Richard (Dick) Scovill. The two went on several cross-country trips to see family and friends and the beauty of America. They had romantic anniversaries and getaways including a cruise to Alaska, a 35th anniversary in Hawaii, and a fabulous 50th anniversary party. Sybil loved the people in her life deeply. Sybil and Dick’s family ended up spread out over four states, but one or both usually travelled to be present for all the milestone events in the lives of their children and grandchildren. She loved being a daughter, sister, wife, mother, grandmother and aunt, and was equally loved back. Sybil also had incredibly strong and loving bonds with her several friends, forging life-long friendships. Nothing made her happier than being with family or friends. Sybil had a quick smile, loved a good laugh, and just plain liked having fun! She wasn’t afraid to try something new! She had several hobbies and interests across the years: fishing, boating, gardening, knitting, sewing, quilting, bird feeders, bridge, theater, game night, wine night, coffee morning, shopping. Her morning routine included reading the newspaper and watching the news, and she enjoyed talking current events. She was a loving, independent, strong and resourceful person. Sybil even broke the stereotype for her generation, embracing technology. She used Facebook and texting early on to stay in touch with family and friends. During COVID, she would use FaceTime or Messenger to video chat. She was one of a kind in so many ways. Her family and friends are going to miss her terribly, but we are comforted knowing she is in heaven with the Lord and loved ones who passed before her. She is preceded in death by her husband Richard, her parents, a sister, a nephew, and some dear friends. She is survived by her family of Lynne Keith-McMullin (Daniel), Michael Keith, Matthew Keith (Judy), and Daniel Scovill (Donna); grandchildren Caitlin Menge (Daniel), Duncan Keith, and Emma, Anna and Daniel Scovill; great grandchild Rowan Menge; sisters Donna Klapp and Rita Dinges; nine nephews and nieces on her parent’s side, four on the Scovill side, and their families. On Thursday, October 28, there will be a visitation at 1:00 PM followed by a funeral service at 2:00 PM at St. John’s United Church of Christ. The funeral service can be streamed live on St. John's facebook page at www.facebook.com/pg/stjohnuccfreeport/events/?ref=page_internal . Graveside burial for immediate family will be Friday. In lieu of flowers, please make donations to either St. John’s United Church of Christ or FHN Hospice. Please sign Mrs. Scovill's guestbook and share a memory at www.burketubbs.com

Sybil Lenore Scovill 1934&#8212;2021 Sybil Scovill passed away peacefully in her home, surrounded by her loving family, on October 23, 2021. She was born in Freeport IL on July 31, 1934 to Esther and Roy Mensenkamp, the youngest of four daughters.... View Obituary & Service Information

The family of Sybil Lenore Scovill created this Life Tributes page to make it easy to share your memories.