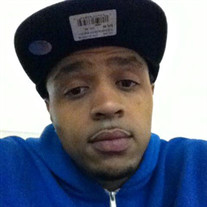 On November 18, 2021, Terrance Jerome Haynes departed this earthly life at the early age of 36. Terrance was born January 11, 1985 in Freeport IL to Marvette Brooks and the late Raymond K. Haynes. Terrance attended Freeport High School and received his High School Equivalency Certificate. In 2004, he began working at Chrysler Daimler in Belvidere, IL. Terrance had a heart of pure gold. He was a loving father who loved his children unconditionally and they shared their love with others. He would do anything for anyone that was in need. Terrance loved to laugh and make others laugh. He also loved playing basketball. He would play basketball everyday if he could. His friends gave him the nickname “Cheeto” as a teenager and they continued to use that name into adulthood. When he would walk into the room, everyone would say “Hey Cheeto” as if singing a song. He had a bright and shining personality and a beautiful smile. He was the most loving child a mother could ask for and he grew into a very respected and respectable young man. Terrence was a very hard working, responsible young man who took pride in taking care of his children, family, and friends. Terrance leaves to cherish his memory his loving mother, Marvette Brooks; special cousin Patricia Brumfield, aka Mom; grandmothers, Etta M. Ross and Dorothy Haynes; 3 children, Da’Niyah, Terrance Jr, and Kinkade; 1 brother, Timothy Haynes of Lawrenceville, GA; 4 uncles, Fedil Brooks, Christopher Brooks, and Michael (Marylon) Brooks, all of Freeport, and Patrick Brooks of Rockford, IL.; 1 aunt, Georgina Haynes of Freeport; special friends and mothers of his children, Marcia Green and Kailee Williams; and a host of nieces, nephews, cousins and friends. Terrance was preceded in death by his father, Raymond K. Haynes; aunt Maxine Brooks, sister Shellaine Haynes, grandfathers Ernest Lee Brooks and George Oscar Haynes; and great-grandmothers Rosena Brooks and Inez Jackson. Terrance will always be remembered as “Cheeto” with a heart of gold, filled with smiles and hugs for everyone. His life may be gone but he will live on in others because he chose to be an organ donor. This is a testament to his genuine love for others. Services will be held at 11:00 a.m. on Saturday, November 27 at Faith Center Freeport. A visitation will be held from 9:00 a.m. until the time of service. Burial will be in Freeport City Cemetery.

The family of Terrance Jerome 'Cheeto" Haynes created this Life Tributes page to make it easy to share your memories.

Send flowers to the Haynes family.