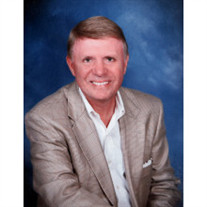 The life journey of Thomas Aldrick Ferguson, Jr. 73 of Naples, FL & Freeport, IL unexpectedly came to an end March 2nd, 2021. Tom's life began on October 11, 1947 to Thomas A. Ferguson, Sr. and Eleanor R. Ferguson (Eilders) in Freeport, IL. Tom attended Henny School and Millerburg School, the last one room schoolhouse in Freeport. After graduating from Freeport Sr. High in 1965, Tom attended Highland Community College for 2 years and then UW Platteville, where he graduated with a BA in both Business Administration & Economics. Later, Tom furthered his education at the Kellogg Graduate School of Management at Northwestern University and the International Institute of Management Development in Switzerland. Tom married his high school sweetheart, Melinda K. Hoelscher in 1970. They shared over 50 years of marriage, many adventures and even more dances! Tom was the proud father of their two children, Tim and Jennifer. Tom began his professional career in 1970 with Newell Corporation, the company he was with for 30 years. During his long tenure, Tom advanced from Display Manager to many group presidency positions, returning home to Newell Window Furnishing in Freeport, IL as President in 1984. Throughout his career with Newell Rubbermaid, Inc, Tom developed several patents including the "Magic Fit" window shade. Tom eventually became the President and Chief Operating Officer of Newell Rubbermaid, Inc. in 1992, a position he held until 2000. After his career with Newell, Tom continued to share his time and talents. He was an active member of WPO and YPO throughout the years where he continued to enjoy problem solving, sharing of knowledge and camaraderie. Locally, Tom generously shared his knowledge and experience through management of new "Newellies", teaching confirmation class or being an advisor for his children's friends and later spouses. Community development was especially important to Tom. He was active in many organizations and initiatives to grow and better Freeport. Vision 20/20 and the building of the Stephenson County Visitors Center were, but, two of the ways he strove to increase commerce in his beloved hometown. He shared his knowledge by sitting on local boards, including Modern Plating and the State Bank of Freeport. Tom was also a very social person who enjoyed time as a member of the Freeport Country Club and La Playa Beach and Golf Club in Naples. He & Melinda were long time members of St. John UCC in Freeport. He was an ardent adventurer who loved traveling the world with his wife, Melinda and countless friends. He passed his sense of adventure on to his children by teaching them to ski, boat, ride motorcycles and to never stop exploring. Tom was also an avid cyclist who traversed the U.S. and Europe with a great group of friends on their motorcycles. Tom & Melinda moved to Naples, FL where they have enjoyed the last several years. They have reestablished a love of golf, enjoyed the grand kids on the beach and developed a love of fine dining with good friends. Thomas A. Ferguson, Jr. is survived by his wife, Melinda. His children; son, Timothy S. Ferguson and daughter, Jennifer Ferguson Holton (Eric). Grandchildren; Lauren E. Ferguson, Logan S. Ferguson, Aldrick (Alec) T. Holton, Simon A. Holton & Frederick (Fritz) A. Holton. His Mother, Eleanor R. Ferguson (Eilders), sister, Sally Hoskinson (Steve), brother, David Ferguson (Deb), Sister-in-law, Martha A. Cahoon (Roger). Tom was taken from us too soon but the impact his life had on family, friends and community will keep his spirit alive. Tom was greeted in heaven by his father, Thomas A. Ferguson, Sr., Mother and Father-in- laws Frederick (Fritz) A. & Thelma Y. Hoelscher, his grandparents Ben and Ruth Eilders, Charles and Wilhelmina M.S. Ferguson, as well as Nephew, Sloan Hoskinson. A visitation will be held at Burke-Tubbs Funeral Home from 3:30pm to 6pm. Friday, May 28th. A Celebration of Life will be held for family and friends whose lives were touched by Tom, on Saturday, May 29th from 4 pm - 7pm at the Freeport Club. In lieu of flowers, donations to honor and memorialize Tom's life can be made to Thomas A. Ferguson, Jr. Memorial Fund. Please sign Mr. Ferguson's guestbook and share a remembrance at www.burketubbs.com

The family of Thomas Aldrick Ferguson Jr. created this Life Tributes page to make it easy to share your memories.

The life journey of Thomas Aldrick Ferguson, Jr. 73 of Naples,...